Spotlight on, fog generator working. And WRT appears on stage.

That’s what crosses my mind when I set off, early in the morning. Just about to turn around in the winding hole after the New Scarisbrick Arms.

This is what I saw when I opened the back doors, earlier on. Mist rising up, over an absolute calm Leeds & Liverpool Canal. 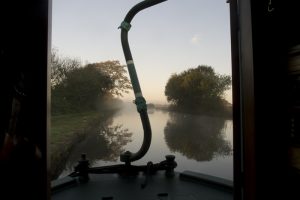 What a gorgeous morning

Am I not a lucky girl?

I do my daily pre-cruising checks, and prepare to set off. The view to the front of the boat is stunning as well, albeit a bit blinding. 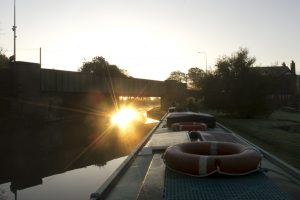 Casting off is a bit of a challenge: WRT is covered in ice. And the ropes are frozen solid. 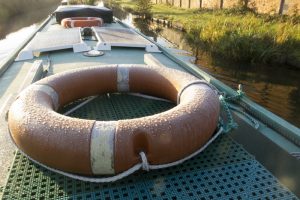 It only takes about ten minutes and I’m close to the winding hole. The last time I was here on my own, see What a difference…, they started the wind machine. This time a blinding spotlight is on (called Sun), plus the fog generator is working. I nearly miss the bloody winding hole!
It just reminds me of being on stage. Luckily there is not a lot of audience around, here, at this time of the day, in the middle of nowhere.

In the end turning around is relatively easy, and I’m on my way back to the marina.

But what about Lawrance, I can hear you ask?
Well, as a Dutch saying reveals: there are show horses and work horses.

Lawrance is in Turkey, playing golf.
Me, the work horse, took WRT out to be able to polish starboard side. I had already done portside and the back while moored in the marina.

Polishing the boat wasn’t really in the plans, but shortly after Lawrance changed the cruising chimney for our mooring chimney I discovered a nasty line of rust, coming off the roof. It completely spoiled WRT’s shiny sides. And polish was the only thing that took the rust off.

I must admit, neither WRT or me were reluctant to leave the nice skies of the marina, to go cruising, just the two of us. 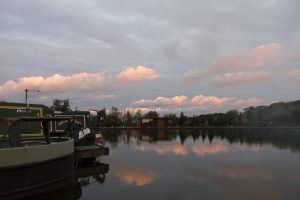 So about half an hour after Lawrance left for Turkey, me and WRT left the marina.
Me in my new water proof jacket (because it’s wind proof and warm as well). I got a complete fisherman’s outfit. Just like Lawrance has.

Proper fishermen recognise it immediately, as I find out.
I pass two anglers, and one of them says: “Morning mate!”
I answer: “Morning!”
The reply I get is: “Oh, I seem to have the gender wrong. SORRY!”

I really enjoy my cruise to the New Scarisbrick Arms.
I see two kingfishers. One goes under the same bridge at the same time, just heading in the opposite direction. I always think a day with a kingfisher is a lucky day.
And it gets even better when I also see a rainbow. 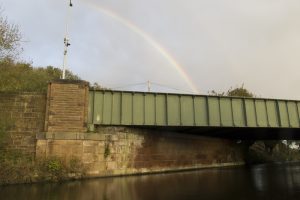 Rainbow with no rain

I manage to polish the rest of Thursday, but Friday and Saturday morning it rains. Heavily. So knitting is the occupation for most of the time.

Saturday afternoon I realise I still need to learn to speak better English.
While polishing I see a boat, trying to moor up behind me. Seems to be someone on his own, so I decide to give him a hand. Just to be faced with a difficult problem.

How do I (obviously woman and foreign), without shattering his male pride to pieces, tell an adult English male on a shiny, all singing and dancing deep drafted narrowboat, to use about a tenth of the revs he’s using at the moment, and to put the tiller 180° in the other direction, if he really wants to moor up.
Because the only thing he does now is bury the stern of his boat only deeper into the mud.
To get off the shallow side of the canal I suggest to reverse until the stern is in the middle of the canal. But either he doesn’t want to listen, or he doesn’t know how to reverse. It takes him half an hour to get afloat again.
When he leaves I find out he even has bow thrusters.
One just wonders…

Anyway, after four delightful days I’m on my way back to the marina.
I had a backfiring fire that set off al the smoke alarms.
I had a fridge that showed an error: rotor jammed (but the manual didn’t gave me a solution).
The top of my index finger still shows a 45° angle (from all the polishing I did).
But I enjoyed it so far.

So far.
After about half an hour of cruising I realise my biggest mistake:
I should have put my thermals on!
It’s flipping cold. Even in the sun. And going through Halsall Cutting is absolutely Baltic.
Knowing that it is 27°C where Lawrance is, doesn’t help either.

It’s that time of the year, the clocks have gone back.

One thought on “WRT on Stage?”