My name is Wea-Ry-Tired (or WRT) and I came to life in 1999. I’m a 60 ft narrowboat with a trad stern and a traditional layout. This is me in the making.
Just so you can send me a card: my birthday is on the 23rd of February. 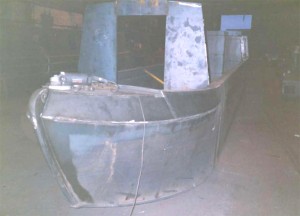 Of course I look a lot different now, but you can already see my beautiful nose (a bit like Cleopatra’s, if I may say so).

Another picture of me. One of my worst experiences: I’m flying! But I suppose all creatures have a stressful time when getting into this world. 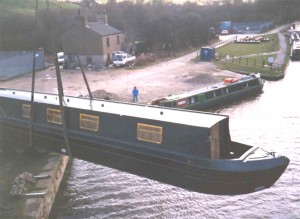 And finally me as a teenager. 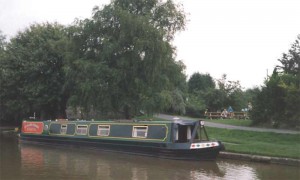 I enjoyed my time with the couple that commissioned me, but unfortunately they decided to sell me after 13 years (I still don’t know what I did wrong…).
I had a horrible 1½ year after that, but then there was light at the end of the tunnel. I was for sale again.

This time I did my best to convince Magda (and later Lawrance) that I was the one that they wanted. And I succeeded.

I knew I was in for a hard time. Lawrance and Magda are nice people, but they were novices to narrowboating. So it took some time before I could relax again while cruising.
But they learned fast (I made them do…).

Now me and Magda are working absolutely fine together. Like we’ve done this for years…!

P.S. I like to thank my first owners for the permission to use these old pictures on my weblog.