Quiet days at home base

Wednesday last week,  around noon, we were back at WRT after a trip to Scotland. In the car were fourteen of my banana boxes; mostly books, kitchen stuff and clothes. After emptying the boxes there is still room in the kitchen, but certainly NOT in the wardrobe. And that’s with my clothes only! So I decided to put half of my clothes in a box for a charity shop. Even extra cupboards above the bed won’t make any difference.

It’s strange to see my books and some other small things on the boat. And to see this year’s calendar and certain pictures on the walls. It’s even more strange to realise that some of the things I took with me for the boat, are definitely out of place on WRT.

Last Thursday was a busy day. First Trevor from RCR visited us, telling us all about the engine of WRT. He explained how to do our own maintenance, and discovered a major problem with the engine: we have a leaking water hose. Hence the water in the bilge, and the need for topping up with water every day whilst cruising. He told Lawrance how to fix it. Other than that, the engine is fine.

Just as Trevor was about to leave, we got a phone call from the cafe: they just got a fridge delivered. With the help of Stuart, our nearest neighbour, we managed to get it inside the boat. Lawrance connected it to the 12V system, and presto, we have a fridge!

And just as we have installed the fridge, the Fire Brigade turned up. No, don’t worry, we were alright. They were on the marina to tell boaters about smoke and CO alarms, and when we told them about our recently fitted but too sensitive smoke alarm they provided us with two new ones. Free of charge. Another problem solved.

Then we were off to Tesco to buy proper food. After a delicious supper (and the non-avoidable dishes) it was getting a bit cold. So we lit the solid fuel stove. And although we think the chimney might need sweeping, the inside of the boat got cosy warm, and in no time fleece and jumper were off, and the fan of the ecofan was happily turning round, and round, and round…

Well before the alarm goes off, the next morning, I wake up; I needed the toilet. I had a quick glance into the saloon and saw to my surprise that the ecofan was still working; there was still some glowing coal in the stove. Being sure we will manage during the winter I went back to bed.

The alarm woke us up at six o’clock. Lawrance needed to take the car to Lancashire Ford for it’s annual service. And after the car was ready, we went to Midlands Chandlers in Preston Brook. We bought all the parts for repairing the engine, and also got a coal scuttle, a chimney brush and polish for the solid fuel stove. 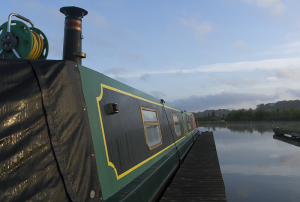 Evening at home base

Today is our last day on WRT for a while. Tomorrow we’re going back to Scotland, and, after the weekend, back to work and/or back to Holland. Neither of us really wants to leave…
Over the last days we’ve done a lot:

Another hour later:
Bingo! I turned the heating onto electricity, put the desired temperature inside on 30°C, and we sometime later we know for sure that the 230V circulation pump does work. All three radiators are getting warm. From the moment on the heating didn’t start properly, after being switched off because of the nice weather, I had the feeling it would be something silly that causes the Alde to malfunction, like a couple of contradictory instructions I gave it. I know from my programmable thermostat in Doorwerth how easy that is done. I still think that this is the case, but at least we know that we won’t need the stove, or the electric blanket tonight. To get the Alde running on LPG will be a task for when I (or we) will be back at WRT in July.

As I said before, it’s a steep learning curve…