I’m doing all the work

Did I mention the snow and ice we had in January and the first couple of days in February? Well, just after that things changed dramatically. In such a way, that I’ve done four days of cruising already; 10¾ miles in total.

First of all it was Lawrance’s 70th birthday on the 16th of February. Two of his golf mates came all the way down from Scotland. Davie had been on my tiller before (in 2015) but a narrowboat was totally new to Jim. So for I while I got a bit dizzy, going zig-zag instead of straight. 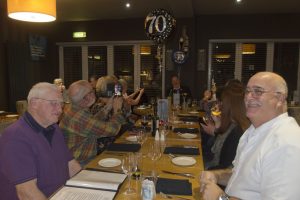 Jim (in front, on the left)

No, they didn’t take me to the birthday party at the New Scarisbrick Arms. I would have loved to go, because I would have met my big little sister there. Now I missed her, and I didn’t see (or taste) the very special Portugese meal Magda had: Bacalhau, which is dried and salted cod. 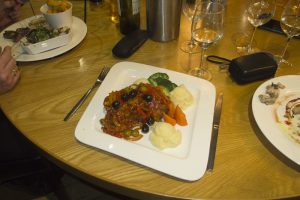 But I also didn’t have the terrible hang-over some of the guests apparently had, the day after…

Then the weather got even better. I don’t recall having been in the marina while it was so quiet. 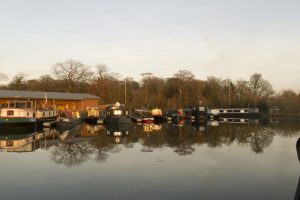 And with the forecast being absolutely perfect, a decision was made to meet up with my big little sister, and have the first towpath barbecue of the year. For me also a chance to see her new porthole spiderwebs, made by Magda. 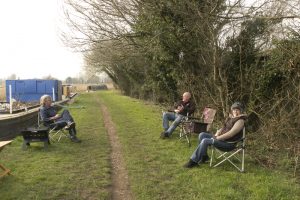 One of the porthole spiderwebs. With her in the background. 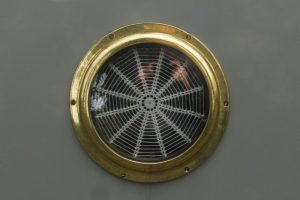 The next day began very beautiful. 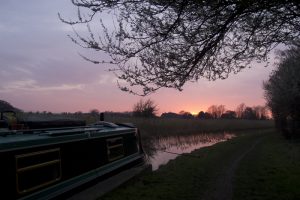 And except for Lawrance having a severe cold, and being in bed, it is (again) a very good day. 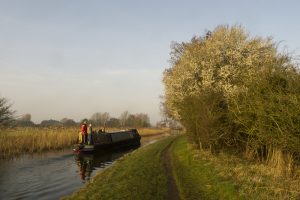 Later that week the weather gets even better. The highest temperature in Holland in February ever (18.9°C in De Bilt on Tuesday) and one day later in the UK 21.2°C in Kew. No, I didn’t go out. Yoga, bread, the usual.

I’m not exactly sure, but I think she is knitting another jumper (to replace the thirty year old one). The new one has something to do with the Fair Isle, and apparently the yarn she uses matches exactly my in- and outdoor colours.

I presume I have to deal with Lawrance on the tiller, the next couple of months…

*The early bird catches the worm