Nine o’clock, we said, that’s when Bob and Linda will start opening Bridge 10.

Nine o’clock, we don’t have a choice. I know it’s blowing a 45 m/hr wind, and it’s pouring down with rain. But we’ve booked a passage into Liverpool, so we have to go!

Nine o’clock Linda starts doing the bridge. Bob goes through and moors up, the others try to cast off in the gale force wind. I’m on the tiller, Lawrance is busy helping everyone to un-moor. Then, of course, there is nobody to help us, to get two sets of two pins out and get pins, ropes and us safely back on the boat before WRT sets off on her own.
In the end Lawrance stays ashore to help Linda to ‘lock’ the swingbridge, i.e. secure the bridge with a rope…

In the meantime I’m passing Bob who shouts: “Slow down, there is something blocking the canal just around the corner.”
Indeed, I see four boats in front of me, not moving forward but going all over the place. Mind you, it’s 45 m/hr winds, and we’re just in open countryside.
It turns out it’s the place of the breach of last summer, and they are still doing things. They are positioning two (wide) barges on the towpath side and banksmen tell us to wait.

Isn’t this silly? CRT knows we will (and have) to start at 9 o’clock to get into Liverpool.
Why not wait half an hour until we’re past? Especially with one of us being a wide beam. Two barges and a widebeam, that just fits in the Leeds&Liverpool at that place.

That obstruction mastered, we’re approaching bridge 9, the first of the bridges CRT used to do for us, but we have to do now ourself.
By the time I’m getting nearer I expected the bridge to be open and three of us going through. But the bridge is still closed, so Lawrance says: “Just let me off, and I’ll do the bridge.”
So that’s what’s happening. He does the bridge, and, although we should close the bridge after three boats, we all go through at once. No chance for us last three boats to moor up or hover, in this kind of weather.

The bridge is very slow, so closing takes hours, I’m waiting around the corner (with head-on wind, so WRT kind of stays where I want her to stay). With Lawrance finally back on the boat we head for bridge 6. We can just contact Bob on the two-way radio’s to say we’re on our way, but he’s nearly out of reach.

When bridge 6 comes into view we see the woman from the added (sixth) boat in the flotilla, just closing the bridge. She sees us to, and starts the procedure to open the bridge again.

What exactly goes wrong none of us will ever know, but the bridge stops working at all. In the still very high winds I manage to get Lawrance ashore. He can’t get the bridge going either. So I sign-language to them: Shall I phone CRT?

After telling WRT to behave I get my phone from inside the boat, and phone CRT.
Get’s this stupid massage about everything I can do online, and something else I can hardly understand, then I get a real person. I tell her I’m on nb WRT, on the Leeds&Liverpool Canal, and I’m stuck at Netherton Swingbridge, bridge no 6, which can’t be opened. She says she will set me through to the local branch.
I explain the situation again to the next woman I get on the phone. First she asks me if I can go somewhere else, where it is not so windy, I’m hard to understand.
“No, I can’t. I’m on the boat, trying not to end up diagonal in the canal.”
“Why are you stuck at the bridge?”
“Because we can’t open it.”
“So you can’t go through the bridge?” (I’m not sure where this conversation is leading to…)
“What bridge are you at? Oh, there is no swingbridge number 6.”
“Sorry? It’s right in front of me!” 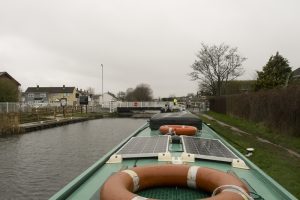 Then she asks a (sensible) question, that makes me loosing it completely (don’t forget, it’s 45 m/hr winds, rain, and we have a time schedule to keep): “What city are you in?”
“I’m in f***g Liverpool.”

Long story short, they connected me to the Leeds Office. She promises me the North-West branch will phone me back asap (they still have to, by the way…).
After 15 minutes I decide to call CRT again, and ask for the Wigan Branch. Explain the situation, and that woman says: “I’ll phone you back asap with and ETA for when help will be there (they still have to phone me back…).

That’s half an hour gone. Everybody else is way ahead of us. But we still have to be at Stanley Locks around 1-ish.
Half an hour later a CRT van turns up. With five men! One of them fixes the problem straight away: he resets the system. As we’ll find out later, the other four men are the volunteers for the locks we have to go through… 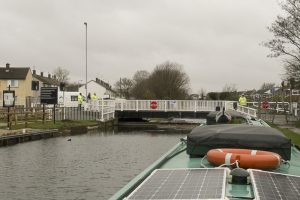 We’re now an hour behind everybody. So I have lunch (and try to get dry-ish and warm) while Lawrance is on the tiller. We arrive at Stanley Locks just as the lock is ready for the last two boats. The other boat has never done a lock before, so while we’re slowly going down I explain to the skipper the do’s and don’ts. I tell him we’re going out as a pair, slowly, going as straight as possible, right into the next lock.
“And whatever happens, DON’T USE YOUR BOW THRUSTER!”

Very slowly we move out, trying to go as slowly and straight as possible in the horrible wind. Everything goes fine until… he uses his bow thruster and WRT cannot but hit the lock. Luckily we are going slow.

The other three locks are a piece of cake, and then we’re out in the docks. It’s a bit like being in The Perfect Storm, but WRT behaves perfectly. The rain finally stops, and I must admit: the wind is a lot less than this morning. 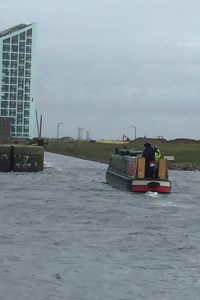 Still we fly through Sid’s Ditch, with the wind at the back. After that the wind just comes from every direction. WRT is going diagonally, which is not a problem in the large docks, but getting from one dock into the other I have to straighten her up, and try not to hit any stone walls.

The rest is kind of easy. The wind drops significantly while we’re in the tunnels (how strange), and hits me with renewed force in the open parts between the tunnel. I just never know from which side it will hit me. At the last lock the whole flotilla is back together. Waiting for the volunteers to show up. 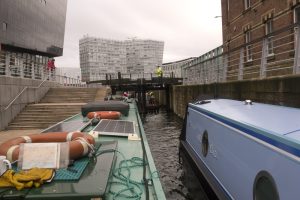 Out of the last lock, I’m so used to cruising in this wind that I just perfectly sail into Albert Dock and into Salthouse Dock. Only mooring up onto these short pontoons is a bit of a problem. I need speed to keep WRT straight in this wind, and I can’t go too fast or I’ll end up like King Richard: under the car park.
Bob, our inexperienced widebeam skipper, has to reverse right into the corner of Salthouse Dock, the most horrible mooring of all.
The only thing I can say: he’s a natural. He just does it! Brilliant, Bob!