It’s May Bank Holiday weekend. Lawrance is off on a boy’s weekend out, i.e. his annual army reunion in Blackpool. Ann & Mick on Rorah are out as well (but not as we
know it). 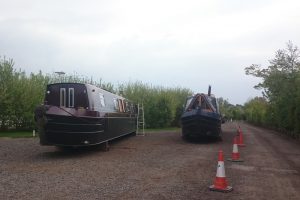 So me and WRT decide to have a girl’s weekend out. Well, in fact it is WRT’s idea. She has been bugging me all week. “Can we go out? We could visit my little big sister! Please?” “Maybe”, I keep telling her, “but, as you should know by now, it all depends on the weather.”

Lawrance leaves on the Thirsday, and that day definitely is a no-go. Gusts of wind up to 20 mph. I know that for sure, because we bought an anemometer (wind speed meter). Friday morning, probably around the same time as Lawrance goes to his bed, I wake up in a mill pond. So I tell WRT: “OK girl, we’ll give it a try.” WRT nearly jumps for joy.

Before I set off, though, I need to think. What will I need at hand while cruising? I can not just phone the crew to fetch me this, that or the other. And I’m not sure what will happen if I leave WRT to find her own way and jump inside to get things myself. But as soon as I think I’ve got everything covered I set off (and will be sniffing until I moor up, because the one thing I don’t think of is hankies).

Safely out of the marina I suddenly turn into a nervous wreck. There’s me, on my own, what the f**k am I doing? There are boats moored, there is oncoming traffic; I nearly panic. Then I ask myself: How often have you been on the tiller of WRT? (86 cruising days, I just checked the log books). How far away from home base and friends are you going? (6 miles one way). How often have you temporary moored up on your own while Lawrance is getting a lock or bridge ready? (so many times, I don’t know).
So get a grip!

Of course all goes well. But I am certainly nervous. A bit like when I first got my driving license in the mail, and my father handed me both driving license and car keys, saying: “Go visit your aunt and uncle in Oldenzaal.” I know, if need be, I can walk home (although the home is then somewhere on the Leeds & Liverpool Canal). And I’m well within reach of friends. So after a short while my nerves calm down a bit. Especially when WRT tells me in a moody tone of voice: “Remember what I told you on the 14th of May 2014?” (see Maiden Voyage)

And no, I’m not doing this long, six mile journey in one day. First I go down to Holland.
I know, that should read: I go to Downholland Hall Swing Bridge. But being down in Holland gives the impression that me and WRT crossed the North Sea and are in Holland for the girl’s weekend… 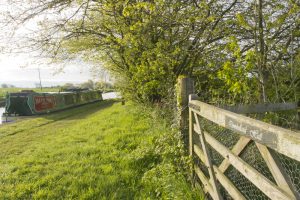 Mooring up is a piece of cake, lunch delicious, and, best of all, the sun comes out. Supper is in the well-know Italian restaurant Il Port(o) di Olanda. On the menu? Pizza Magdalena, something I haven’t made for, say, 15 years!
The taste of the pizza is OK. Not a surprise, I made it every week for about ten years plus. The shape, though, is a different matter. My pizza dish never made it across the North Sea, so I have to use what I have. The rest of the evening is uneventful. 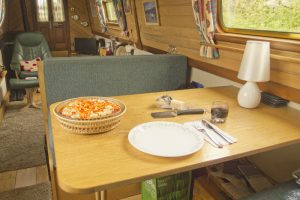 Saturday morning starts with setting a new speed record.
Out of bed – into engine room – make note of battery status – switch on inverter – go midships – switch on heating system – reprogram it – go to dining area – check position of WRT – go back to bed. All this in approximately 5 seconds. Must be nearly the speed of light. Which is the aim, because time tends to go slower when you’re doing near light speed. So I could have done even more, during these 5 seconds. Like polish brass, or clean the fridge.

What I should have done, though, was going to the toilet. The plan was to stay in bed for another half an hour until the boat is cosy warm, but my body decides otherwise. So after 15 minutes I can but go out of bed.

Yes. I know, I now have to explain two things: why reprogram the central heating, and what happened to the coal fire? Reference the central heating: it’s programmed to run only between 6 and 8 in the morning. So when I want/need it on before 6 o’clock I have to reprogram it. And the coal fire? Well, at the moment WRT is a coal-dust-free boat. Last Wednesday we had all our carpets cleaned, i.e. the ones on the floor AND the carpets on the wall. 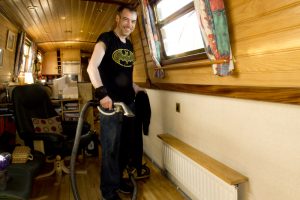 Plus we cleaned all the shelves, all the books, all the furniture, the entire floor. In fact, everything is so shiny, when inside, one has to wear sunglasses! So until the end of the summer the fire will have time off.

I have the feeling that WRT wants to visit her sister just to show off her shiny insides.
So, after I’ve done my duties (clean the bathroom and the fridge) and after I had my lunch I set off for the second part of the journey. It’s only 2½ miles, but it includes a swing bridge…

I know I can moor on the side where the control panel is. But at some of these bridges there is only room for a 40 footer, and I can’t remember how much space there is here. The wind will put me right against the bank, so mooring should be easy, but will I manage to get off to go through the bridge? In a reasonable time, in case there are 19,468 cars waiting? It turns out there is enough room.

Before the bridge, that is. Behind the bridge also is enough room, but some of that is taken up by a moored CRT barge…

In the end it’s a piece of cake. Moor up. Open the bridge (no cars, whatsoever). Take WRT through the bridge. Moor behind CRT barge. Close the bridge. Set off. Simple. 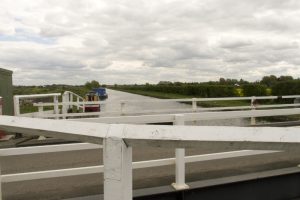 So I presume my next challenge will be going OK as well: turn around in the winding hole and reverse down (for non-boaters: it’s very difficult to steer a narrowboat when reversing) to a mooring in front of WRT 4, just between two yoghurt pots. Even with it being windy, and people watching me.

I presumed right.Without hitting anything I turn, reverse and moor. Only the middle rope ends in the water when I do a girly throw.
Job done. And I must say, I’m a bit proud of myself. And of WRT, of course.
Who, although there is a boat between her and her sister, immediately engages herself in silly girly boat talk. And will keep doing that until late at night. 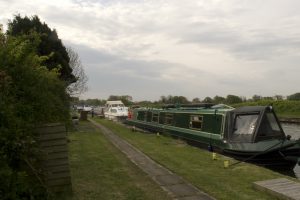 OK, we, the adults, talk as well, but after a delicious risotto on WRT 4 I go home for my normal early night. Tomorrow is not going to be easy. I have to one swing bridge, cruise 6 miles, and have to get back into the marina. The weather forecast predicts 20 mph winds, so I might be out longer than planned.

Sunday morning again sees the light speed run, only slightly different. I don’t have to reprogram the central heating, and I don’t go back to bed. I do check the position of WRT, even with being in a secure area. Because yesterday night someone threatened to cut the ropes. And he would do that (would you not, Andy?).

Today it’s a bit windy, to say the least. Setting off is not a problem, cruising as such neither. But this one and only swing bridge turns out to be a bridge too far.

Thanks to this CRT barge I don’t manage to moor at the side of the control panel. Worse, even, I just get blown onto the bank on the towpath side, the wrong side to do the swing bridge. And when I try to pull WRT a bit forwards to get the middle rope near a bollard, I realize: I’m grounded as well.
Great! 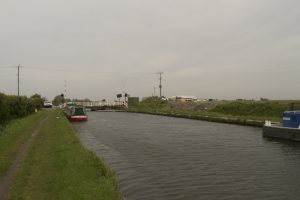 Wrong Side and Grounded

I moor up with three mooring lines, manage to save the TV-aerial from blowing off the roof, and get the anemometer out. Gusts up to 35 mph…
Nothing else I can do, I have lunch. Meanwhile the barometer drops…, and drops. And the wind gets stronger…, and stronger. I tie a rope onto the TV-aerial. A bit later I rescue the life belt. Yes, definitely time for cross stitch.

Then, three hours later, nb NIPS, turns up. A local, and also a single hander. He has the same problems as I had, but on the other side of the bridge. In the end I help him and he helps me. And me and WRT are on the move again. I decide we won’t go any further than Downholland Farm. There are bollards, and I don’t fancy (won’t be able) to moor up with mooring pins.

Right decision. Even with the bollards mooring is difficult. The (now) very strong wind right from the back blows WRT forwards, while she has to go back, in order to reach the bollards.
At 15:00 hrs we’ve done enough for the day. Tomorrow I want a mill pond, 25°C and clear blue skies. I think me and WRT deserve that…! 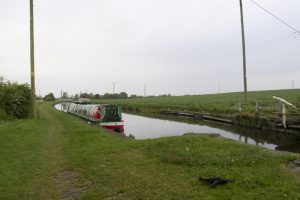 Monday morning it’s indeed mill pond. It’s still a bit too early for the 25°C and the clear blue skies, so shorts and sun cream stay where they are: in the cupboards.

After the usual morning rituals we set off at 8 o’clock. And about an hour later we’re back in the marina. I do need somebody to help me to moor at our jetty, so I park WRT temporary at the diesel pump. And decide to fuel up as well, while we’re there. 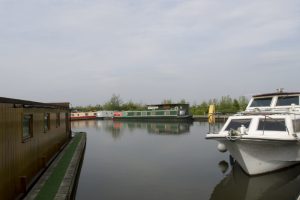 By the time we’re refilled, enough people have gathered to give me a hand. Effortless I reverse back to our own jetty and with the help of Ian and Guy I put WRT back into her usual space. Except for some extra diesel in the tank, a few more engine hours and a few more scratches it’s like nothing has been going on, over the last four days.

Epilogue
To be fair, as soon as they know the situation I’m in, both Ann & Mick, and Andy & Christine offer help immediately. But I decline that. Politely.
And is there any nervousness after the first day? No, I just bloody enjoy the challenges!

Oh, and just to put things into perspective: from the marina to Lydiate is 13 minutes by car…

4 thoughts on “Girl’s weekend out”