After a night in the Premier Inn in Nantwich (because the work on the boat isn’t finished), a night with family (because our car needs to be at our home marina in Scarisbrick) and two nights on Wea-Ry-Tired (still at Overwater Marina) we are finally ready to rock and roll. 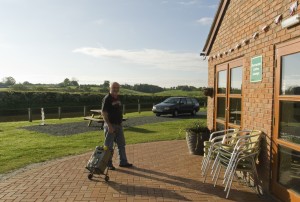 The start of the learning curve

Although it is our boat, I give Lawrance the honours to sail his boat from the jetty to the pontoon where the fuel pump is. Not because I’m such a nice person, but one: I’m scared to death, and two: I don’t want to make a fool of myself in front of all the people in the marina. In order to get to the pump, Lawrance has to reverse out of the jetty the boat is in, turn her around, and try to get to the pontoon. It is sunny, but also very windy, so it’s needless to say that we (he) don’t look like experienced boaters during this manoeuvre. Luckily Dave, from Overwater Marina, is there to give us a much needed hand. Then, fuelled up, we think we need a rest, and go for a delicious breakfast at the cafe. 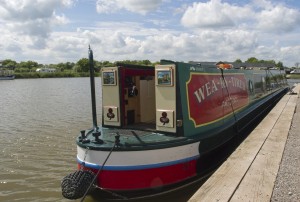 But at 13:00 hrs we are away on our maiden trip. Lawrance manages to get out of the marina and onto the canal. The people at Overwater Marina suggested first to go around the island that’s in the marina, but Lawrance feels confident enough to exit the marina straight away.

Off we go. It’s all a bit scary, because it’s almost a year ago now, since we were on a narrowboat, and Wea-Ry-Tired is also two feet longer than Sienna, our hire boat from last year. But she acts perfect. In fact, when I get at the tiller, she kind of tells me: ‘Don’t worry, I’ll take you anywhere’.

Since I can’t remember how to operate locks (old age?) it’s me at the tiller, and Lawrance doing the first two locks, Hack Green Locks. I manage to get Wea-Ry-Tired (WRT) into the lock without damaging boat or lock too much. But as soon as Lawrance lets the water out of this (deep) lock, and me and WRT are going down fast, I hear a screeching sound from inside the boat: the fire alarm. There is nothing I can do but tell Lawrance, after I manage to pick him up. The same happens at the second Hack Green Lock. In fact, every time the boat get’s in the shade, the fire alarm goes off. And sometimes even when I walk underneath the alarm. So we do the only thing we can do: take one of the batteries out.

We happily cruise towards Barbridge Junction, where we turn right onto the Middlewich branch of the Shropshire Union. After about an hour we get our third lock: Cholmondeston Lock. Knowing this time my ears won’t get damaged in the lock I’m not worried. But while Lawrance is yapping away with another boater, and I put WRT in forward gear for a short moment (to stay away from the cill), I suddenly have a major problem: I end up with the throttle handle in my hand. OK, I know, that’s where it should be, but preferable with the other end of the handle properly attached to the boat… Since this situation is not covered by the Boater’s Handbook I can only think of one solution: switch off the engine, and shout: STOP. To Lawrance of course, who is opening the paddles, not to the boat. She’s not voice operated yet.

It turns out to be a grub screw that came loose, and after Lawrance fixes the throttle handle back onto the boat, we continue our journey. We see some Black Prince hire boats, and I wonder what happened to Sienna. Would she still be in the fleet? Probably not. No doubt last year Black Prince gave us, novices, the oldest boat they had. When another Black Prince boat is heading towards us, I mention all this to Lawrance, and when passing this boat I look at the name: it actually is Sienna! We consider this to be a good omen.

After 6½ hours of cruising we safely park up at Church Minshull. We have a well deserved meal at The Badger, and after that are fast asleep as soon as our heads hit the pillow.