It’s 6:15 in the morning when I wake up from the noise of water, splashing against the hull at starboard side. It makes me need the toilet, so I decide to get up.
Carefully I make my way towards the bathroom. But walking is extremely difficult.
WRT rocks like hell (is she getting her own back for New Year’s Eve?), and I need to keep my hand on the wall to avoid bouncing into it.

Back in the kitchen I open the Venetian blinds. It’s still dark(ish) but I can clearly see the huge waves that roll towards us. From the wrong direction for our stove (again…). 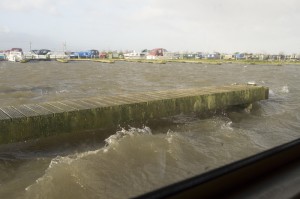 There is still some glowing coal in the stove, but opening the bottom vent doesn’t restart the fire. I empty the ash pan, and rake the stove, but it just ‘simmers’.
When Lawrance gets out of bed, he rakes the stove again. It improves… a little.

But things are definitely NOT OK. This time we set off our CO-alarm. Not once, but a couple of times. That, and the horrible smell of the backfiring stove, make me seek shelter on the well deck. There it is cold (with one side of the cratch cover open), but at least I get fresh air. But even with the doors closed, I can still hear my small bell, ringing again. It bangs against the wall, and a quick calculation later today reveals that the amplitude is almost 12 cm. 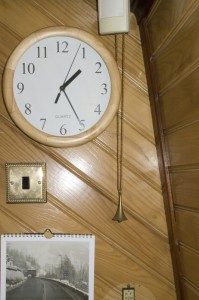 When we had these backfiring problems during the ‘weather bomb’ (see Weather Bomb) I went on the internet, trying to find out what exactly causes the stove to backfire. Because I think that it is not the strong wind, but something else. Yesterday evening we had a strong wind as well, but from a different direction, and the stove was burning fine. I found an article about air pressure that caught my attention. It was about the situation in a house, so I tried to adapt it to a narrowboat. 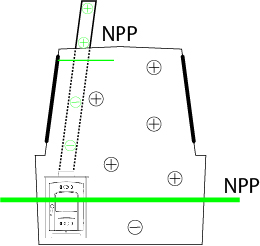 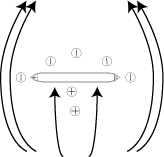 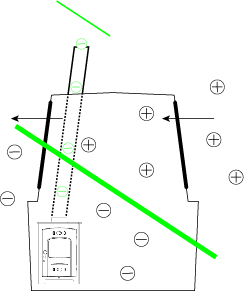 The only way to balance the pressure around the stove is… via the chimney.
Hence the smoke puffs, coming out of the vents into the saloon.
Yesterday the wind was directly towards the bow. If the neutral pressure plain tilts accordingly, the stove is in the high pressure zone, and work well. Very well, like it did.

I also found out that, with the strong winds (regardless the wind direction), the flames of the hob burn with a different colour. They are more orange in colour, which means: not enough oxygen.

I’m still puzzled. I know, a lot of people advise us to get a higher chimney, or get a cowl. But I don’t think that will solve the problem. We just need to find out the best way to ventilate the boat. Or turn the boat around, which would keep the chimney’s neutral pressure plane IN the chimney. 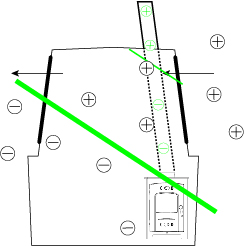 Windy, but boat turned around

Unless someone has an even better idea…