This is exactly the situation in which my Ann comes in handy.

This is me, moored up in Middlewich, just before King’s Lock. 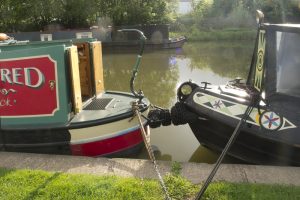 Some people just don’t give any room to manoeuvre! And, even with being on rings, I’ve noticed that, as soon as I start loosening a rope, the biggest wide beam you’ve ever seen will come around the corner, on full speed…

So that’s why I like Ann (both of them, of course).

Not that the other Ann is still with me. No, they are far away. And I’ve cancelled going on the Macclesfield Canal. There was supposed to be a Gardner Rallye (Gardner being the make of an ancient boat engine, but these engines are still around), at the beginning of June. That’s cancelled, because CRT expects both the Peak Forrest Canal and the Macclesfield Canal to be closed by then because of lack of water. Unless we would have a biblical deluge.

I didn’t get out of the marina just to get stuck the entire summer on the Macclesfield Canal. So I turned around, and headed for the Shropshire Union Canal. And maybe the Llangollen Canal (if I can get my head around doing lift bridges that have their controls on the non-towpath side…).