I’m at Coole Pilate, a nice mooring on the Shroppie, just south of Nantwich. I’ve got a picnic table, a BBQ and plenty of room to put stuff ashore. I’m planning to clean my well deck.

But then the wind picks up. I immediately realise that everything I put outside will be blown away. So other than using my hoover, the cleaning of the well deck has to wait.

That was yesterday.
Today I plan to move . Turn around just before the Audlem flight, and moor up at the Nuclear Bunker near Hack Green locks. I’m up early. It’s all fine…
But after my first coffee the wind picks up. According to the weather forecast it’s 12 mph, with gusts up to 25 mph. Only… the 12 mph winds last 20 seconds, the 25 mph winds last about half an hour.
I consider it not safe for me to start cruising. The cruising as such is not the problem, but I won’t be able to moor up.
So I stay and do the laundry.

Later that day I realise I did the right thing, not to cruise.
I loose my rhubarb plant.
The guy in front of me nearly looses his boat.
The one in front of him… that’s a different story. He stops in the middle of the canal, just next to where he wants to moor, and all the sudden I see that boat just nicely moving sidewards.

He must have both bow and stern thrusters.
Or he is in a different universe. Because when the heavy rain eases off and I go out to check WRT, that guy takes his seats out and him and his partner have supper outside, with a lot of wine, I hear. 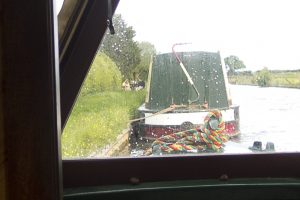 But I certainly want that feature he has on his boat.

And then it was time to put the new posts on the weblog.

Finally, today, I have the time to contact my provider.

I was going to move today, or better, I actually need to move. But it is very windy, so I decided to do the laundry. Which means I have 240V anyway, to charge the computer.
And yes, after an hour on the phone, the problem is sorted.

Not that there will be posts every other day. Being on my own I just don’t have the time for it. And not a lot happens.

Also there will be less pictures. Steering WRT I can’t just get my camera and take pictures.

But at least you know I’m still alive, and happily cruising.