Planning and preparation for cruising

And everything else that happened between my last post in February and now.

First of all me and Ann went to London to see Cirque du Soleil, visit various museums and eat at posh restaurants.
And see millions of kids…

We did the National History Museum.
That was a waste of time; it only took us 40 minutes to go through this entire kindergarten.
And to take this picture of an Archaeopteryx fossil I had to push away about 50 kids.

We skipped the Science Museum, because of the queue of about 100 yards that was at the entrance, and we basically expected the museum to be a huge kindergarten as well.

So we spent most of the time in the V&A.
That was great. Loved it. Especially discovering this painting of Singraven Water Mill, because I used to live about 10 minutes south of it. 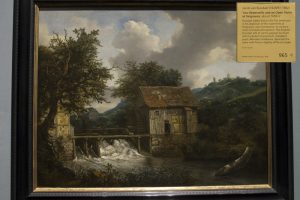 We also went on a boat trip to Greenwich. That was like being on the North Sea: huge waves, and a very high tide. We were probably the last ones to get a boat back to Westminster Pier. 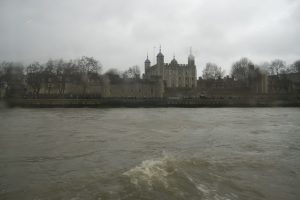 In Greenwich we decided to have a quick glance at the Maritime Museum, with the idea to come back another time. Did the whole of this kindergarten in about half an hour…!
And no, we won’t come back. 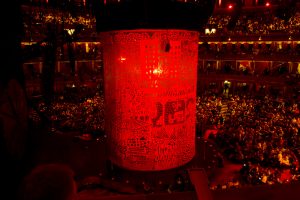 Cirque du Soleil in the Royal Albert Hall was disappointing. Everybody complained about there not being a kind of story line.
And all ‘stunts’ went on way too long, as to stretch them to fill the two hour show.
What I once saw on TV, and what Ann saw in Glasgow, was much better.

Back from London preparations for cruising really started. All cabin lace had to be washed, starched and ironed (no, not ALL, I managed to forget the ones inside one cupboard). 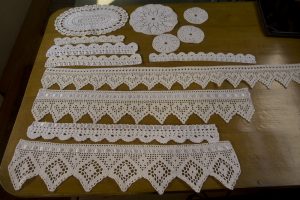 I went to an opera, for the first time in my life. Madame Butterfly, with a pre-theatre dinner for the four of us, and me and Ann staying for the opera. 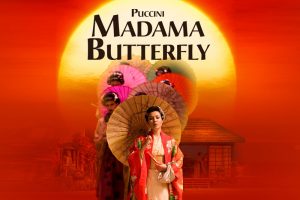 It was also time to get our wall carpets cleaned. To get that done we actually cruised! About 100 yards, which might turn out to be a significant cruising distance, this year! 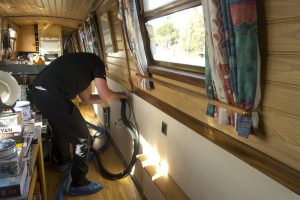 Cruise planning at that time was still rudimentary.
I planned to leave on the 7th of April, after Lawrance’s army reunion (and me and WRT’s obligatory Girls Weekend Out). Cruise to Anderton Boat Lift, meat up with Anne from nb Pratty Flower to cruise the river Weaver together.

That was it. I just didn’t feel like planning.
So I should have know. Usually, when I feel I can’t plan, something major happens, which would have ruined my plans anyway, had I made them. But who could imagine something that big.

At first Lawrance assumed we would still go out cruising. But I couldn’t really estimate the risks if we would go out.

Lawrance is one of the vulnerable people: over 70, male, overweight and high blood pressure. He just would have to stay in self-isolation. That would mean I would have to do all the shopping, cassette, water etc. But that’s the same, either being in the marina or while cruising.
I supposed he could be on the tiller, without a risk to catch the virus from a stranger.
It would prevent him getting roaring mad because of sitting in the boat and having nothing to do. Which would make my life a lot more pleasant…
So everything pointed to: go cruising.

But I had three ‘buts’. One is: will the government look at a boat=home in the same way as us? Are we staying at home in self-isolation while cruising?
And a more important ‘but’: what to do when one of us gets very ill somewhere in the middle of nowhere. No phone signal, no road access to the canal, not registered with the local GP? Should we stay in the marina a bit longer?

And what to do with shopping? One day we went to Tesco, and, besides no toilet paper, there also was no flour (how many people do you know that are able to make their own bread?), no long life milk (the only milk that we can store on the boat, having a small fridge). How far would I have to walk to find shops that might have what I need? When in the marina at least I have a car…

We decided to see how things would develop, and I started the first of long overdue cleaning jobs.
It surprised Lawrance that much that he immediately took a picture of it. I did something he had never seen me doing: scouring a pan…! 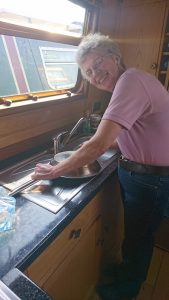 Then the decision was taken out of my hands: a total lock down.

The pre-theatre meal at Bliss Kitchen will be the last meal out for a while.
Our (mini-)cruise across the marina will be our last cruising for a while. 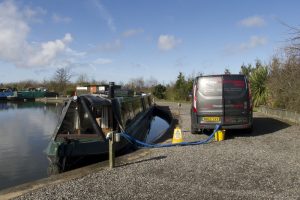 Lawrance plays golf on his telephone now, the marina quiz night turned into a weekly event, all sitting on our own boat, in front of the computer.

The only thing that changes every day is not the scenery around us, but the sky. 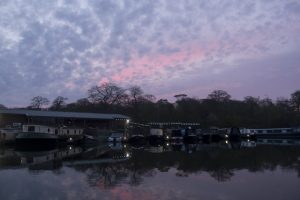 And even that stops. After a couple of days the sky is blue, day in, day out.

One thought on “Planning and preparation for cruising”