I see a couple walking on the towpath. They pass the galley, the dinette, then stop. Look at me and… wave enthusiastically!

I don’t have a clue. They look kind of vaguely familiar, but that’s about it. Maybe people who met Andy and Christine during the years they cruised on WRT. It has happened before that people mistake me for Christine, both of us having very short hair.

But no, they know us. It’s Dave and Sheila. We travelled with them, and an American called Michael on a very small boat, in 2016 on the Trent&Mersey. We kept meeting at the locks, and got on well together, the five of us.
It was hot that day, and when we emerged from the lock at Stone, seeing the pub on the left and a mooring space on the right, we decided to call it a (cruising)day. We ended up, all five, at the pub, at around 3 o’clock. And didn’t leave the pub much before midnight. We just had a great time.
Dave and Sheila admitted now that their where afraid Lawrance wouldn’t make it back to the boat, because the only way was over the lock…! 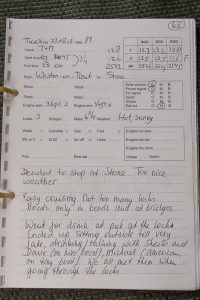 In 2016 they were ‘bloody hireboaters’, but nice ones. Now they are here in Ansty on their own, brand-new boat. And mention that it was our enthusiasm that made them book a building slot, as soon as they got back from their holiday in 2016. The first available slot was in 2018, so they only had their boat since September and are now, more or less, on their maiden trip (except for the odd trip to the nearest pub, last year).
I’m still of the opinion that, when you do extensive cruising, after about ten years you know all the other boats that do the same, and you meet them time and time again, Especially if you, like us, have to start every year from the same spot. We’ll see. We have five more years to go, to get to our ten years.

I vividly remember that 23rd of August 2016. It was hot, I was on the tiller, and when I raise up in the lock at Stone, discovering a pub/restaurant at either side of the lock, we could but stop. Although we felt a bit lazy, we had only done 3¼ hour, that day, 3 locks, and just under 7 miles. Nowadays we consider a 3¼ hour day as VERY LONG DAY!

Other than this, we’re still doing fine. We’ve cruised 71.3 hrs on 23 cruising days.
Done 139 miles.
Played approximately 60 games of cards, of which I won a fair amount.
Played one game of golf, which I lost. Tomorrow we’re playing again (and no doubt I will loose again, but I don’t mind).

I started using the towpath as a source of food. A couple of times we’ve had nettle pasta. 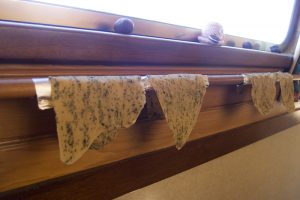 Nettle Pasta on the Drying Rack

At the moment I’m drinking elderflower kefir.
And on the roof is my new herb garden. Only six plants, but much admired by towpath walkers. So I cook with fresh herbs, and salads are completed with roof-grown ruccola.

The weather has improved a bit, i.e. the very cold edge to the wind has gone. And we had numerous days that seats came out, and parasols. Even the barbecue had to be used. 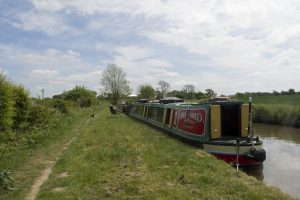 Seats and parasols out

Not that this improved weather is good for the amount of water in the canal. The Coventry Canal was at least 4 inches lower than normal. 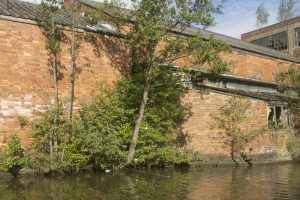 And the Oxford Canal feels a bit shallow as well, although that might just be normal.
But then again, we will see. We’ll get to where we get to. It’s a hard life anyway…