At first everything is going OK. It’s raining, and a bit cold, but I’m doing fine.
Until… I get oncoming traffic + moored boats at starboard side + a very small part of the Trent & Mersey.
I need to steer… and slow down… and…

I hit a moored boat…! The family inside gets the shock of their life, but they survive.
My pride doesn’t. I’m awarded 25 points for the hit. 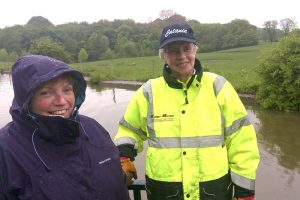 First day on a tiller

Since then I’ve tried to be near perfect when on the tiller. Maybe because of this little incident in the first mile on a narrowboat…

There is a boat coming out of lock 9 and I wait until he’s past the bridge between the two locks, and safely moored on the lock landings before I come out of my lock. Lawrance is already at lock 9.

The boat comes out of lock 9, goes under the bridge, points the bow somewhat towards the lock landings and stops. He’s small, so the sticking-out stern is more or less just in front of the lock.OK, I must give him credit: there is a about a boat’s width between his stern and the reeds. 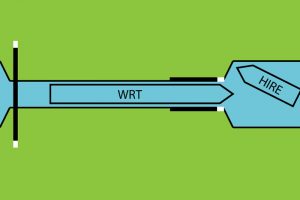 Since I can’t go nowhere with a boat right in front of me, I wait. And wait. And wait.
Then he throws his arms in the air and urgently signs me to come out of the lock.

Well, I reckon I will get, say, just the dinette out, and then WRT’s pretty nose will hit him.
So in the end I tell his wife/partner, who’s standing next to me at lock nine, to tell him to moor up properly at the lock landing so I can get out.

By then Lawrance, and the women from the next oncoming boat, realise that there might be a slight problem.
Lawrance walks back towards lock 10. When he’s under the bridge I can see him asking the guy to throw him the middle rope. After two throws Lawrance gets a soaking wet rope, and manages to get the hireboat moored up on the lock landings.

Passing the other boat I can see the guy think: But I left enough room between stern and reeds for her to cruise around me???!!!

Yes, if WRT was bendable, and would be able to sneak (snake?) around!

Case 2
We just had supper, Lawrance is about to do the dishes, I’m going outside for a fag.

A hireboat is about to leave lock 8. Mom and little daughter run towards lock 9, the guy cruises out of the lock. He leaves the gates open, so there must be a boat coming down.

Usually the crew of that boat coming down would be at lock 8 after a short while, but nobody walks past WRT. I’ve got a feeling… I look out of the well deck: no, no boat coming down.

And then I see a woman at lock 8 starting to open the gates paddles at the front of the lock. She doesn’t realise that the top gate is still open.
In a flash I get visions of WRT on the bottom of an empty canal, so I start running towards the lock to close the gate.
Luckily a guy in The Stables, next to the lock, must have noticed it as well, and he stops the women from opening the paddles. Together they close the gate.

So I turn around, walk to lock 9 to tell the hireboaters who just came out of the lock that they left the gate open.

The guy on the boat looks at me and says in a very moody voice: “Where am I? On the boat. I’m steering the boat, lock gates are not my concern.” (So, Ian, if that’s the new rule, would that not make your life a whole lot easier?)

His wife is more friendly, and explains that they just picked the boat up, want to moor up, but now have to do all these locks, and…

I then decide to tell them that it also might be an idea to close the bottom paddles before opening the top paddles. The guy on the tiller keeps going on full revs to try to stay in the middle of the lock, with the water just streaming through the lock, because all the paddles are fully open!

I explain quickly how to operate a lock, and then walk back to the boat.
I will hear from Lawrance later that apparently this family had to ask another (hire)boat how to moor up a narrowboat…

Case 3
The woman that tried to open the paddles on lock 8, with the top gate open.
The one that, as I notice, carefully listens to the instructions she gets from the guy from The Stables.

I didn’t do any locks today. Lawrance is doing the dishes, it’s not raining. So I decide to get my windlass and gloves, and help that couple through some or all of the locks.
And keep an eye on the boat of case 2 in front of them…

The couple of case 3 also just picked up the boat, also have to face these all these locks, but are a lot more cheerful. While explaining what to do, together we get through three locks in no time.
There is mooring space just after lock 11 (and just in front of the boat from case 2; I see the guy sitting at the table, with a face like thunder).
Time for the crew of case 3 to get something to eat.

I walk back to WRT, smiling…

I’m not sure about the crew of case 2. The woman will have a very hard time. She’s unsure what to do, and no doubt HE will know better/best, and he’s male.
Which, together, is not a good starting point of a narrowboat holiday.

Afterthought
Back on the boat I read my posts about our first two weeks on a narrowboat.
And I realise how much I have learned in the last five years.

I don’t hit boats, locks or lock sides, tunnel walls or bridges. I sometimes touch them, yes, but just.

I do locks without having to think about the sequence (although I left a gate open today as well, due to yapping to a gongoozler. But it didn’t take me long to realise it).

I can handle WRT on the millimetre, so to speak (unless it’s too shallow, because then she does her own thing).

And once moored up she isn’t affected by passing boats either (which is handy during holiday times, with all the boats with a 4 miles/hr tick-over speed).

The only thing that still beats me now and then, is wind. And I presume on a narrowboat you will never be able to beat the wind.

And still I’m a bit anxious soemtimes, when venturing into unknown territory. Or going on rivers.
Ask myself: will I be able to cope?