Why, Oh Why, Father Thames? 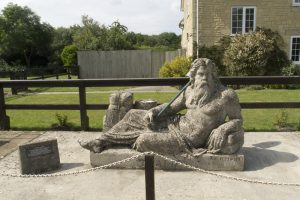 I was really looking forward to see you again. Remember, three years ago, we shortly met at Isis Lock in Oxford?
So what it I do wrong? What did I do to you to threat me the way you did?

Yes, zero, because they don’t want to pay my license fee and loose half a day straight away.
But I like it, not having all that mud around my delicate underparts. Just clear water, and heaps of it. 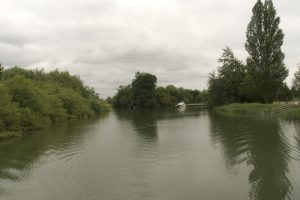 Day One the lock keeper at Eynsham Lock cuts a foot off me. Suddenly I am 59 ft, instead of my usual 60 ft. I know it sounds silly but I feel sort of disabled.

When I moor up that night it seems I have crossed the Atlantic. Am I in Alberta, Canada? Because people seem to live in tipis. 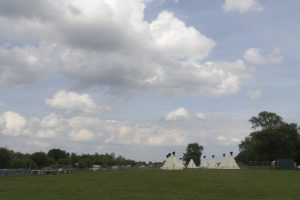 Or is it the Grand Canyon where I am now? I have a huge wall next to me. The gang plank is actually on the roof. And definitely needed for access. 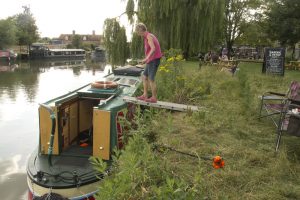 Gang Plank on the Roof

On Day Two I get attacked by a narrowboat.

He is going full speed, downstream. I have no chance to avoid him, and he hits me just at the side of my beautiful nose. It hearts terribly, but I seem to get away with some minor scratches on my rubbing strake, everything off the shelves (replaced by heaps of the usual paint rubbish from under the windows).

It begins OK. I see the first blackberries of this year. Early, I think…
Then I moor up in Lechlade. And get attacked by about sixty cows. 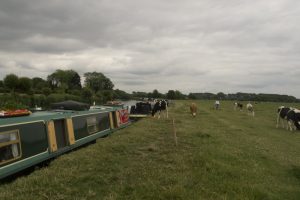 I can’t tell you what time it happens. Yes, I now what part of the hour it is: 15 minutes past the hour. But I don’t know what hour, because the silly church tower in Lechlade knows how to imitate Big Ben, but hasn’t managed to do the amount of hours. 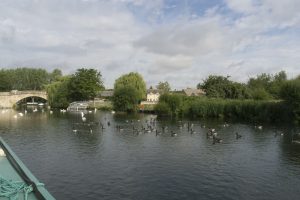 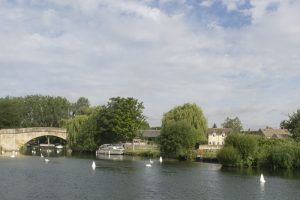 Swan, trying to tell something?

After mooring up at Day Four I have to duck about every five minutes. Huge Galaxy airplanes try to hit my roof, and take off my garden, storage boxes and water reel. 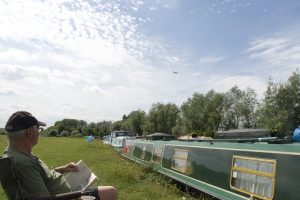 Galaxy in my Galaxy

At 6 o’clock the Galaxy planes are replaced by Hercules planes.

And planes are even trying to attack me during the night. Of course I can’t see what planes, and I don’t recognize the sound of the engines. But (other than some other female, not too far away) I don’t get a lot of sleep.

Day Five is me on my way back towards the Oxford Canal.
Going downstream, now, so I don’t have to work too hard.
But in a tight bend I get attacked by a grumpy old tree.

After the initial shock I realise that I’m doing fine, but I notice one of my solar panels dangling in the water. The tree just lifted it off!
And worse, that grumpy old tree had scraped Magda’s arm, damaging her peachy skin. 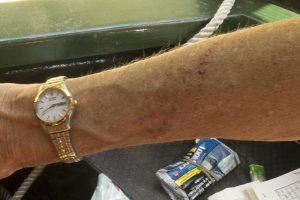 Luckily I find a very peaceful, rural mooring for the night, so we all can recover. 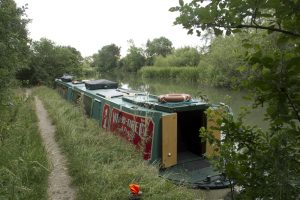 Rural Mooring for the Night

Day Six is not a bad day, except for the fact that the one on the tiller first (rightfully) leaves the red buoys on his starboard side, and then, just 50 metres further, wants to leave the green ones at starboard side as well. Luckily I manages to stay afloat.

And while mooring up I get dizzy, I’m turned around completely, and end up bow facing downstream. The steerer must have gotten distracted by the fair Rosamund of Godstow Abbey (well, the ghost of…) 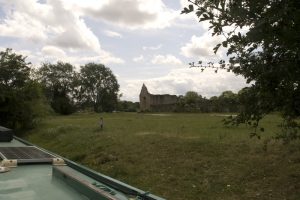 Day Seven is a very long (cruising) day. All the way from Godstow to Osney Bridge in Oxford. One hour, yes, one hour I have to work!
OK, work? No, not really, I’m going with the flow, so doing 1400 revs I kind of fly.

My last day on your waters, Fater Thames. My license runs out at midnight.
In the end it all got better. I might consider to visit you again.

What? What do you say? Say that again!

THEY BOUGHT ANOTHER SEVEN DAYS LICENSE ???!!

One thought on “Why, Oh Why, Father Thames?”