It’s Tuesday, late afternoon. Lawrance has just put new coal in the stove, and as always the smell of the coal wipes through the boat. The coal is supposed to be smokeless, but when it first heats up, it certainly does smoke. It leaves the chimney in big, dark-grey clouds. Well, it is supposed to leave the chimney. But less than a minute after Lawrance closes the stove door I smell something, and almost at the same time our smoke alarm starts. Not surprisingly, this time the smoke doesn’t come out of the chimney outside, but puffs out of the vents, straight into the boat. We rush to the stove, switching off the smoke alarm, and closing both vents.

We’re puzzled. The stove behaved perfect recently, and WE didn’t change anything. Something that has changed, though, is the weather. We’re currently experiencing a so called weather bomb (or Explosive Cyclogenesis, as it is know officially). This is a situation where the air pressure of a depression at 60˚ latitude suddenly decreases at least by 24 mb (hPa) or more in 24 hours. This storm, called Alexandra, is breaking all the records, with its minimum pressure plunging 44 millibars in just 21 hours, falling to 942 millibars at the early hours this morning. There is an Amber Warning for wind in Scotland and the Nord-East of England.  The wind hits WRT directly on the starboard side, so we keep bouncing against the jetty. Walking is difficult, and we rock so much, that a little bell, hanging from the ceiling, actually starts tolling. But we had strong winds before, without the smoke coming into the boat… So I wonder if it’s not the wind, but a problem with the air pressure that causes it.

I know that the hot air in the stove/chimney is less dense than the air outside, has a lower pressure, and is supposed to suck up air through the vents into the stove to balance out this situation. In that same process the smoke is pushed up into the chimney and out of the boat. The stove is still hot, so in theory this should work. So why is, in reality, the smoke going the other way now? I find out by going on the internet, that there are situations in which the easiest way for a stove to balance out the difference in pressure, is sucking air into the chimney. This, of course, will force the smoke of the coal out into the boat. But that happens only if there is not enough ventilation around the stove. And our stove still puffs with the nearest windows, and the front doors, open. Closing the top vent reduces the puffs, a little bit. But we still have to close the bottom vent as well, a couple of times.

For the oncoming night we decide to close both vents, and hope there is still a bit of glowing coal left, when we get up.

Wednesday morning there is indeed some glowing coal left, and after topping up with coal, our stove happily starts puffing smoke again. Setting of smoke alarms, once in a while, and (even worse) again spreading thin layers of dust on every horizontal surface. AGAIN! We’re still puzzled, and annoyed. We need the stove, it’s not only very windy, it is also getting very cold. At noon the jetty is still partly frozen over. 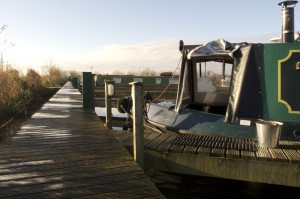 Hail storms are really frequent, and WRT must have been covered in hail/sleet/snow. We don’t check it out (or take pictures), it’s too cold to go outside, but our neighbour’s boat is white, so… The entire day we’re busy, opening and closing stove vents, windows and switching off the smoke alarms. At night we decide to let the fire go out, and to switch on the heating system. It’s programmed to start at 06:00 hrs.

It’s six o’clock the next morning, and I hear the ‘click’ from the heating system. Good
No more smoke puffs, until the weather gets better.

But it’s only after a short time when I notice something near the bathroom: a flashing heating system control panel. Which tells me: no gas. Not a problem. Before Lawrance leaves (the car needs some repairs) he changes over to the full bottle. I turn the heating system on again, switch on my computer and start reading my email. But soon I realise that it doesn’t get any warmer. A look at the control panel tells me why: no gas. This doesn’t make sense.  Did we actually change over from one (empty) gas bottle to the other (full one) without buying a new gas bottle the same day? That’s not us. Besides  that, I can’t remember when we last had an empty bottle. Luckily I have my log book. The last note I made about an empty bottle was in October. That bottle lasted 21 days. A quick calculation tells me: this one lasted 53 days. That’s almost twice as long, so I assume we didn’t buy a new one. I phone Lawrance. He doesn’t remember things either.

Well, here is me. It’s close to zero, bloody windy, and freezing cold. And I have no heating. I don’t want smoke puffs, and I don’t have gas. So it is fingerless gloves, extra pair of woollen socks, fleece. Until Lawrance gets back and we can buy new gas.

At around one o’clock he’s back. And immediately realises what he forgot this morning. He changed over to the full bottle, closed the old, empty one.
BUT DIDN’T OPEN THE NEW ONE.
Once the bottle is open, it gets nice and warm inside WRT.

And what about the stove? Well, we find out that everybody in the marina had the same problem. It’s just the very strong wind, and as soon as that wind drops, our stove is back to normal. The only thing that is left, is dust…!