Banbury, the 1st of July. Do you see the foot bridge? Of course, you can’t miss it. 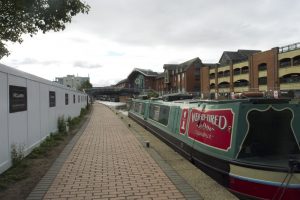 Banbury, the 22nd of July. Do you see the bridge? Is it missing? It sure is. 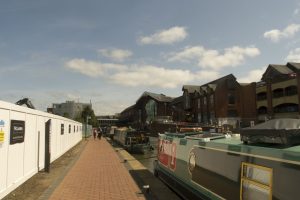 Of course I could have Photoshopped it away. But I didn’t, it is properly demolished.

The end of Le Pont de Banbury, and the end of a very nice mooring spot.

Where now the white fence is, a huge 10 screen cinema building will be build. And in front of the multi-story carpark a 117 room hotel will block the sun. See Banbury Castle Quay in 2020 and wonder…! 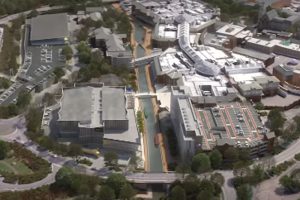 It’s already difficult enough to deal with the random wind in Banbury. I struggle to get from the services into the lock, due to the wind under the bridge; and getting under the lift bridge is not easy either. Just imagine two very high buildings next to the towpath. It will be murder.
And it certainly won’t be good for the solar panels. Nor will it be quiet, early at night, with a 10 screen cinema.
Only one good thing there is to say: there will be a Lidl…

We hope to moor here for the last time.
But even that is not going to happen. Three boys walk past, one of them walking over our gunwales for a while. Although I beg him not to, Lawrance immediately goes after them.

Suddenly I get visions of waking up tomorrow on a boat full of graffiti, all my herbs scattered around, the solar panels broken and hanging in the water, and us floating somewhere in the middle of the Oxford Canal. All the sudden I don’t want to spend the night here anymore.

I know, we might be OK. When Lawrance comes back, he tells me he told the guys not to walk on our home, and if they would do it again, they would end up in the water. Apparently one of the guys even apologized. But I think it’s always better to stay under the radar, so to speak.

So at 16:15 hrs I restart the engine, and we do another two hours of cruising. To a safe spot, way out in the country (taking care to moor up away from the cows). 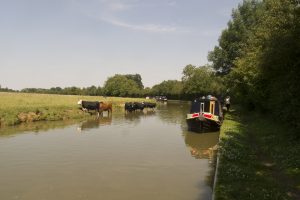 Here we will sit out the three tropical days that are forecast. We’re in the shadow almost till noon, and after nine at night.
When I get up to go to the toilet at 4 o’clock in the morning there is a strange, pinkish light shining into the boat. I just have to take a picture. 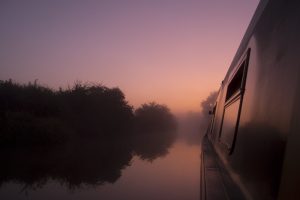 Yes, I’m glad I spent 6¼ hours on the tiller, yesterday!