Ansty is our next stop. Because: we have to play golf.
But before we moor up I nearly jump of the boat. Why? Well, just before you get to Ansty, the railway line runs next to the canal. I’m on the tiller, and, as one does, once in a while I look behind me. You never know if anybody going doing breakneck speed and wants to overtake. In a split second I see a freight train. It looks weird. In that split second I see a locomotive, then a fairly big gap and then the containers on the rest of the train. My mind is saying: is that locomotive actually attached to the rest? It is of course, but I didn’t have time to see the two empty flat wagons. So I turn my head again, clearly looking at the train now. The train driver must have seen that as well. And as a greeting TOOTS HIS HORN THREE TIMES! Needles to say that I didn’t expect that. I can but jump. (In the air, luckily.)

Days are strange anyway. The first night at Ansty I hear a boat (with a light outboard engine) passing us, at 4:30 in the night. It’s still dark.
And after we played golf I got stung by a wasp, for the first time in my life. OK, I got stung once by a killer wasp, when I lived in the US, but that is a totally different matter.

Then we venture out on a new canal, the Ashby Canal. No locks, no water, but a heap of boats. But except for the lack of water it feels like being on a river again. 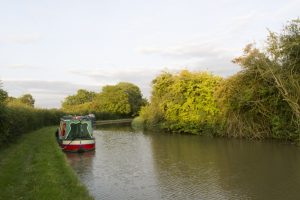 The plans are to go all the way to the end, moor up, take the steam train to Bosworth Battlefield, and visit Snarestone. But we’re unlucky. Next weekend is Shackerstone Festival, and most of the moorings are reserved for visiting boats. So we wind at Shackerstone and spend an afternoon and night at Sutton Cheyney Wharf (August Bank Holiday, so our boat name is mentioned umpteen times). 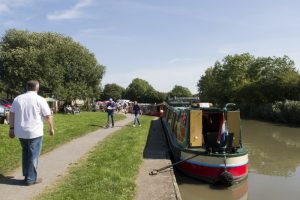 The boat in front of us kind of looks familiar, but the owners don’t react to some Dutch words. 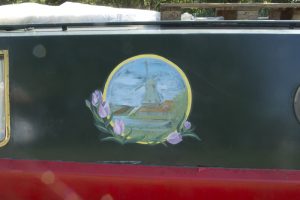 Next day we proceed to Hickley to meet up with Pat and Stephen. 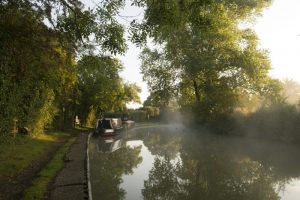 Gone back in time

They arrive after two days. In the mean time we already had two meals in The Lime Kiln, the pub at the bridge. It doesn’t happen that often that I get to a restaurant and have a choice of (at least) seven meals! So we have another meal there the third day.

Unfortunately, in order not to overstay, we have to leave the next day. We’ll be back sometime next year, do the entire Ashby Canal…