OK, that’s us on the canals again. The anchor will stay where it is, life jackets are put away, binoculars are no longer needed. So what do I think of rivers, now I’ve been on three of them?

Well, with the weather we had so far, they are not half as frightening as I thought they would be. Yes, there always is that nagging thought in the back of your head: what if we have an engine problem? (Engine failure means no steering, so do we have to throw the anchor, or should we let WRT find her own way towards the bank, and we tie up on a tree?)

But other than that, being on a river is a pleasant way of cruising. Everything is very well sign posted, although binoculars come in handy to be able to read signs as early as possible. Locks are manned, or have easy to wind paddles. Except for one lock, they are usually smooth filling up. Only the lock doors (on the Avon) are a bit heavy. 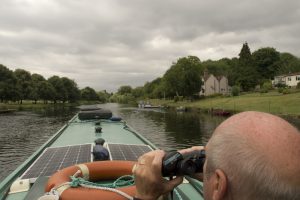 The weirs on the maps, the ‘waterfalls’ one doesn’t want to negotiate, are well fenced off, and don’t suck you towards them (as I thought they would). And the by-wash at a lot of locks is more severe than water coming of a weir. 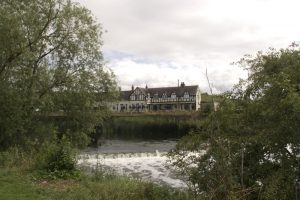 Things I didn’t like? It’s yoghurt pot country, so most of the visitors moorings are yoghurt pot size. Like one cannot park an truck and trailer in a car park, we can’t moor at a jetty the length of our well deck, having the rest of WRT sticking out into the river. 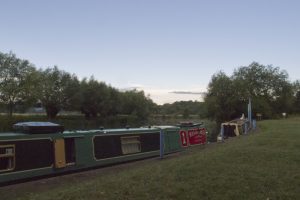 By the way, the yoghurt pots look a lot more expensive (and well kept) than their sisters on the canals…

And all the moorings are far and few. They are at idyllic spots, with lots of weeping willow trees, but our solars then are not of a great help to keep the batteries charged up. 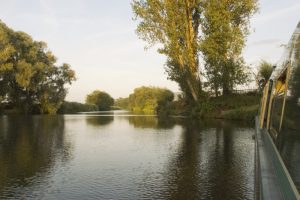 Space for one narrowboat and a yoghurt pot

A river is (most of the time) pretty wide, so it is easy cruising. It’s basically green around and under the boat, because the water is very clean and clear, so you can see all the greenery in the river as well. 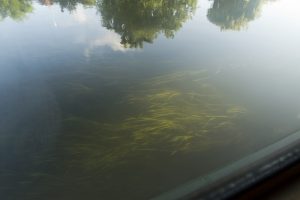 Greens around and below water 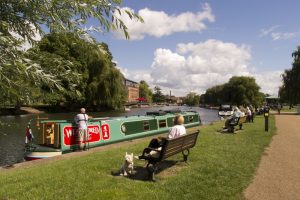 And because one only sees water, trees, fields and lilies, it’s very hard to know where one is. Water is water, trees are trees, and not every tiny bend in the river is on the map. So sometimes the channel to the lock comes at a surprise. Although, once you see the sign for the lock, you also realize that for the last few minutes you’ve been looking at the water flowing off the weir, but that didn’t ring bells…

Oh, and another thing on the rivers. I can’t explain why, but whenever I looked to starboard we seemed to nearly stand still. If I looked to port side we were going pretty fast. And this happens both going upstream and downstream. It might be the bigger distance to the banks on both sides of the river. I haven’t noticed it (yet) on the Stratford Canal, but I haven’t been on the tiller so far.
But canals certainly have a claustrophobic feel…

End conclusion
Was it a good idea to get anchor and life jackets?