I know, we all had a first day of steering a narrowboat. Some do fine from day one, some first have to run into another hire boat (after 500 yards cruising) and then do fine for the rest of their life, for some it takes a couple of years to go straight. But if this would have been me, three years ago, Saltersford Tunnel and Barnton Tunnel would no longer exist!

Anyway, last time we were here on the Stratford Canal I was able to update my reverse mooring skills, cruising behind the hotel boat (motor and butty).
This year I finely find out the difference between tick-over, tick-over-plus, reduced tick-over, and the ten different tick-overs WRT has on offer.

In front of us is a Portuguese family, that got their boat from Anglo-Welsh at Wootton Wawen. We’ve seen them getting all their stuff on the boat while we were moored up there for the night.

He is ab-so-lu-te-ly MASSIVE. When he gets off the boat, the boat rises about 4 inches out of the water. I presume the boat has a walk-through bathroom, because he would never fit through the corridor on WRT. On WRT he would have had to go on the outside, on the towpath. NO…! Not on the gunwales, WRT would capsize straight away!

His wive is not too small either. Twice my size? I think the draft of their boat will increase at least with half a foot, when both of them are on board.
Also on the boat is their little son, and grandma. Haven’t seen much of grandma, except her face. She looks kind of normal, but doesn’t venture outside the cabin.

I’m not sure about this Portuguese family, though. On the back of the boat aretwo diagrams. I tried to make a picture of the diagrams, but could only do that from inside WRT, for obvious reasons. 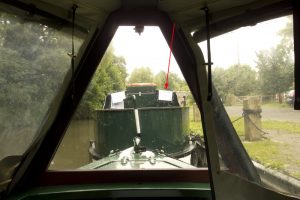 Portuguese On a Hire Boat 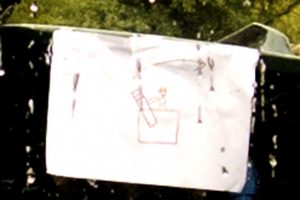 Except from this bumping into a boat (which had nothing to do with the steering, I just panicked and let the boat find her own way) I can only think of one situation where I got my left and right wrong, and that happened the first week we had WRT. I never had to think about it again.

Anyway. A diagram on both sides of the boat… and they still go all over the place. Well, all over the canal, I mean. And the Stratford Canal at the moment is a bit shallow, to say the least. I try to stay in the middle, I try NOT to moor up waiting to get into a lock, I try not to cut corners. I’m not heavy, WRT is not deep drafted… and I still scrape her bottom once in a while.
So going all over the canal is the last thing you want to do. Because you get grounded all over the canal. Especially if two of the crew are standing on the cruiser stern deck (trying to interpret the diagrams?) They zigzag, bow disappearing into the trees, stern firmly aground.

I’m right behind them. I’m capable (and want) to go in a straight line, so I have to go slow. Dead slow. Twice reduced tick-over. Five times reduced tick-over. Yes, WRT still moves, and I still can steer. (Did you ever find out that WRT could do this, Andy and Christine?)

In the mean time Lawrance does most of the lock work for them, tries to give instructions, and, of course, then sets that same lock for us and works it for us.
When I get out of the lock, Lawrance closes the lock door, I go onto reduced (or twice reduced, or nine times reduced) tick-over and Lawrance walks (slowly) to the next lock. Where he arrives, just at the same time as the Portuguese.

Needless to say that it takes us hours to go from Wootton Wawen to Lowsonford.
I have just enough time to make two loafs of bread, before we’re off to the Fleur de Lys for supper.

Oh, and the Portuguese family is moored here as well. I wonder, are we going to stay here for an extra night?