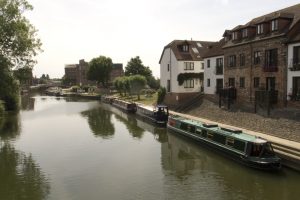 Two nights we spend in the nice village called Tewkesbury. It has a cathedral-like church… 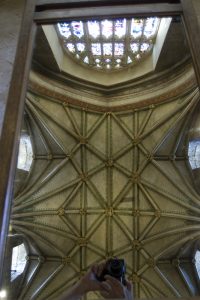 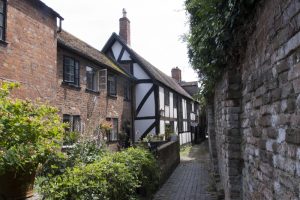 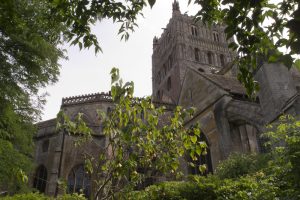 In the Secret Garden 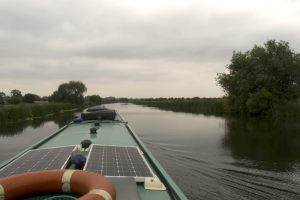 And idiots.
Lawrance is on the tiller, I’m the un-lockie. First Lock on the Avon. According to our River Avon guide there is a swing bridge, just before the lock. But the swing bridge is open. So Lawrance tries to moor at the lock landing. That takes a while. Behind us are a yoghurt pot and another narrowboat.

The lock is not set for us, and there is oncoming traffic. One of the (five) elderly guys on the yoghurt pot comes out, windlass in his hand, checking his watch every ten seconds. When the oncoming boat is out of the lock, this yoghurt pot guy is determined to go in the lock with us, even if it means that he will be diagonal next and beside us, and therefore might be damaged by us, if the lock is rough. He opens one lock paddle, I have to open the other. But, although I’m getting better, I still can’t hold 18 ton of steel with my left hand (to keep WRT away from the yoghurt pot) and open a lock paddle with my right hand. So it takes a while (I decide holding WRT is more important than doing the paddle. We’ve all the time in the world). Needles to say that standing right next to me is one of the other guys of the yoghurt pot. Yapping away, but not offering to hold the rope. He has no windlass, so doing the locks is out of the question anyway. While looking towards the yoghurt pot I see a heap of wine glasses, some empty, some still partly filled. Mind you, this is 11:30 hrs, on a Wednesday!

When we leave the lock, the yoghurt pot comes screaming past, on a bit of a meandering course. In a hurry, that’s obvious. Until… we see him turn around, heading towards the lock again. The other narrowboat that was behind us, and what should have been in the lock with us, later confirms: the yoghurt pot went straight back into the lock when they came out.
Drunken idiots. 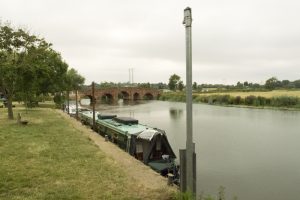 We moor at Eckington Bridge. And have to behave ourselves. We’re right in front of the camera’s that keep an eye on the river levels. 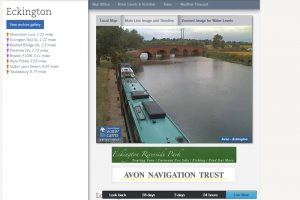 The next day we have to leave, we’re on a 24 hr mooring. We kind of plan to stop at the moorings at Comberton Quay, and play golf on the golf course just next to it, but the mooring is one narrowboat long (plus a bit) and there already is one narrowboat and a yoghurt pot. So we proceed to Pershore.

Two difficult locks we have to negotiate. Well, difficult, it’s the logistics I don’t understand (yet). One has to secure the boat with a front line and a back line. Middle ropes are not allowed, for some strange reason. The only problem is: there is nothing to attach a front or back rope onto, with a boat the length of WRT. With a yoghurt pot, yes.

And one is allowed to leave the exit gates open. Well, one doesn’t have much choice: for example, the landing stage at Nafford Lock to pick up your crew is long enough, but has a 90° bend. Unfortunately WRT doesn’t bend in the middle… 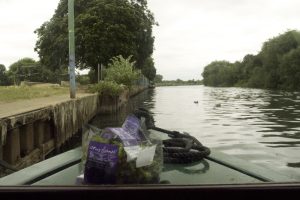 Luckily the visitor moorings in Pershore are narrowboat size (room for about twelve boats), and more or less empty. Asda is nearby, as is a well-stocked second hand shop (I buy four pretty port glasses) and a indoor retail market, where I buy… ENDIVE. So guess what supper is? Yes, stamppot andijvie met spekdobbelsteentjes. The weather is nice, people are out, canoeing, dragonboating, young guys are fishing right in front of us. They only use a fishing line and a float, and still catch one fish every minute.

At two o’clock at night I wake up and think: I’m back in Scarisbrick Marina. It’s very windy, and WRT is dancing. I get out of bed to check if we’re still attached to the bank, and not floating towards the weir. We’re on flood save moorings, so I go back to sleep.

The next morning between nine and ten we’re rising pretty fast. So we decide to use our chains around to mooring poles. I think chains might ‘creep’ up (and down) easier than rope. 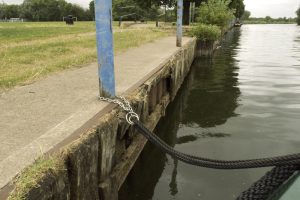 Lawrance thinks it’s someone using the lock, but with all the weirs I don’t think filling/emptying a lock has any noticeable effect on the water level of a river. Half an hour later we’re back to starting level. Scary, especially with the heavy rain that’s in the forecast, which keeps us from playing golf today.
I still have mixed feelings about the rivers…

Mixed feelings, because while cruising it’s absolutely boring. Water, and trees, and water, and trees, and… And you never know exactly where you are; the river just meanders, and meanders.
But if you find a mooring that’s long enough for WRT, then things chance. 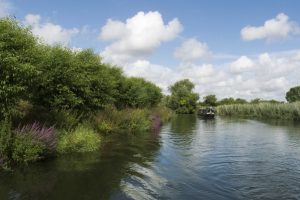 After we leave Pershore in beautiful sunshine we make our way to Craycombe Turn. Two (very heavy) locks to negotiate (but we are able to share, hence the other boat in the picture), and, just before we stop, fifteen minutes of pouring down rain. But it is worth every lock and rain: we’re moored at the most idyllic place so far. OK, cattails, yellow waterlilies and (willow) trees again, but what a place. Absolutely gorgeous!

Who has a view like this, from his kitchen window? 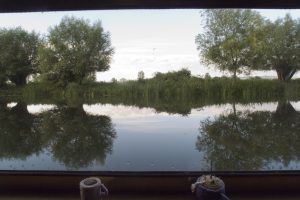 Just a pity that it drizzly rains, the rest of the day. And that the golf course next to it is unreachable. We stay here the next day as well, so I can make bread. 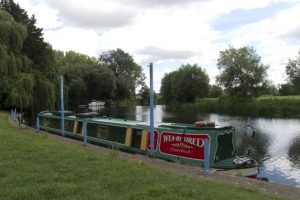 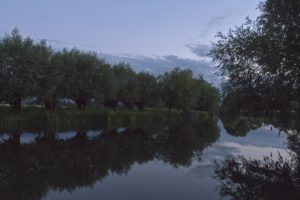 One thought on “I’m nae sure”