It’s my day at the tiller today, and I am a bit nervous. There are three tunnels between Anderton Boat Lift and Lymm, our next stop. I steered through them a couple of times, last year, but now it’s a bit different. We’re on our own boat now, so WE have to repair any damage caused by hitting tunnel entrances or walls. The boat is also two feet longer, and this time has a cratch and cratch cover. The fact that the guy of the boat next to us tells me to take the cratch cover off when going through the tunnels, doesn’t really add anything to my confidence. So better safe than sorry we remove part of the cratch cover, and start heading for Barnton Tunnel. At least we know we have a good working tunnel light. Or, in fact, we actually have two…

Barnton Tunnel (572 yards), and the one just after it, Saltersford Tunnel (424 yards), are some of the first tunnels ever made. And one can tell that the engineers were still novices: these tunnels are absolutely crooked. There is light at the end of both tunnels (just), but don’t ask what awaits you inside. With Barnton Tunnel not being a timed one, and with no oncoming traffic I plunge into the deep. Or should I say: steer into the black?

After a few metres we realise: we could have left the cratch cover there, where it belongs. In fact, the cratch is an added extra: keep the front upper part of the cratch in the middle of the lights and you’re doing fine. You only have to react quite quickly when the lights suddenly seem to move. That’s where the wall isn’t straight.

Without touching the wall in Barnton Tunnel, nor in Salterford Tunnel, we stop for a cuppa at Black Prince’s base at Acton Bridge. Lawrance buys himself a boaters hat, which suits him well. After about an hour it’s time to face another tunnel, Preston Brook Tunnel. And the b****y Dutton Stop Lock, just in front of it (that takes hours to fill). Preston Brook Tunnel (1239 yards) is timed as well, but not crooked. The last time I went through this tunnel it took me 22 minutes. Today I break that record: it only takes me 12 minutes, once again without hitting the wall. 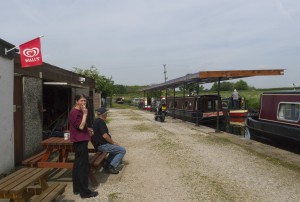 At Acton Bridge, before the boater’s hat

Now we are no longer on the Trent & Mercy Canal, but on the Bridgewater Canal. A canal, entirely without locks, and wide; where bridges have no numbers but names. It’s busy on the towpath and, as before, people look at the boat, see the name, and start smiling. Then, with me at the tiller, I get the usual question: “Are you?” My usual answer: “No, I’m not retired, but he is…”

This part of the Bridgewater Canal is familiar territory, we did this last year as well. So we know of The Golden Fleece in Lymm. And although it’s a bit late when we get to Lymm, there is still a space left. One space, and it is small. I think we won’t fit, but I don’t have (what we call) a carpenter’s eye. Lawrance is sure we will fit, and presto, I park the boat (without hitting anybody) between two other boats, with two inches room left, both at bow and stern. 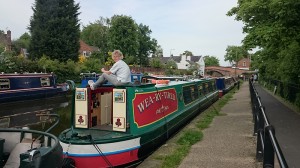 What you call parking

Time to do some shoppings at Sainsbury and then to The Golden Fleece. We have Chicken & Mushroon Pie (Lawrance) and Red Pepper and Brie Cheese Cake (me) in the beer garden, now very upgraded, modern and sterile, amongst heaps of families with heaps of children. 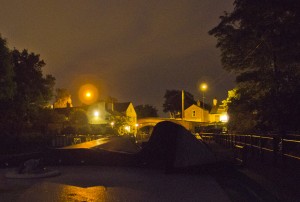