Too weird to make up

There are a heap of locks between Swanley Bridge Marina and Norbury Junction. Thirty-one, to be precise.
The boating season has started so there quite a few boaters heading down north. When we meet them when we are in the locks we’re constantly faced with a very concerned person.
They all say something like: “How did you do that? We’ve basically just passed you at Norbury Junction, and here you are, on your way back to Norbury Junction. And you must have overtaken us somewhere as well…!?” 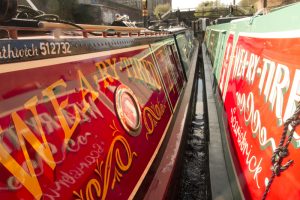 It takes a while to explain to them that: “No, that was a different boat you saw at Norbury Junction.”
And: “Yes, we know them, they are good friends of us.”
Followed by: “No, they didn’t copy our name, our boat was their first Wea-Ry-Tired.”

It takes us ages to get to Norbury Junction. It’s quite full, but we manage to get a mooring space about five boats in front of WRT-4. After the usual hugs and kisses me and Lawrance do our after-cruising checks, close the back and start walking towards the rubbish and the chandlery. Between WRT-1 and WRT-4 a couple passes us. Clearly boaters; you can see that straight away. While Lawrance puts the rubbish in the bin I have a glance at the moored boats. I see that the woman of the couple we just passed has walked back, and is now talking to Christine at WRT-4.

Back from the chandlery (with only a Tillergraph and a Towpath Talk) an exited Christine tells us: “A woman walked all the way from your boat back to ours to ask me if I knew there was a boat in front of us with the same name!” After the usual explanations Christine finds out that the woman is Dutch, so she tells her that I’m Dutch as well. The woman then asks Christine to send me over to her boat, which is called Double Dutch. I look at her in disbelieve. I’m pretty sure the woman I saw wasn’t Annemarie from Dubbel Dutch. So I put the magazines in the well deck and start walking towards a boat called Double Dutch.

And for the first time in ages I can speak Dutch again. It’s a Dutch couple, Coby and Henk, lived in the UK for over 30 years. They tell me that one day they were waiting to go into a lock and out of that lock came a boat with the same name, with a Dutch family on it, living in Rotterdam. So I say: “Yes, that will have been Annemarie and Martin, with their children. They have a boat with a lot of Dutch accents, like the tulip field on the outside.” 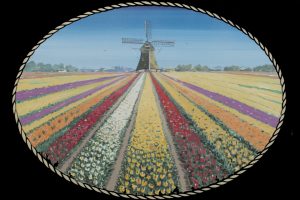 Mentioning the tulip field painted on the outside of Dubbel Dutch doesn’t give me the reaction I expect. But the couple says: “Well, it was busy, and you can’t just block a whole lock and start yapping…!”

Half an hour later, back on WRT-1, I have a port and read the Tillergraph. And guess, who’s picture is in the Tillergraph, under featured boat bilders? Dubbel Dutch. With two guys with hats and Martin, clearly standing in the hatch. So I immediately walk back to Double Dutch to show them the picture. And lo and behold, it’s NOT the boat they met at the lock. So how many Dubbel or Double Dutch are there?

Dubbel Dutch in The Tillergraph

If all this was part of a book, people would say: “Rubbish…!”

P.S. I think I never revealed my finished Dutch cross stitch. Probably due to the fact that we had a problem with the wifi in the marina for a while. So here it is: 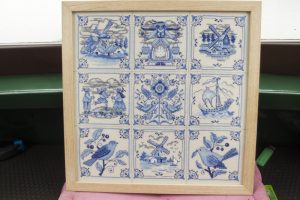 One thought on “Too weird to make up”