But leaving WRT at Overwater Marina is exactly what we do. I don’t tell her that after a few hours driving we put our stuff in another narrowboat. She would just have been upset for a week. 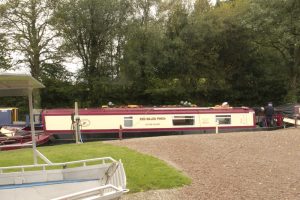 But there is absolutely no reason for her to be afraid. Our home for a week is of a completely different class. It’s a hire boat, 49 ft. With a reverse lay-out, and a shower-over-bath. Every morning (and night) the engine bilge is full of water, and the water tank needs topping up every day. (Would there be some sort of relation here?)

The boat has a cruiser stern. A lowered cruiser stern, to be precise. In fact, one stands about ten inches lower than on WRT. Or on Rorah (the complete crew of Rorah is on this Red Billed Finch as well). Because of the low bridges the roof is more curved than on WRT and Rorah. 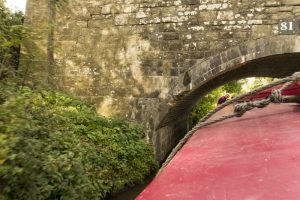 What do you mean? Low?

End result? Negotiating a bridge is like steering a narrowboat for the very first time.

Did I say steering? I’ll rephrase that. It’s 50 percent steering, 20 percent praying, and 30 percent cursing. One moment she’s doing fine (50%), the next moment she just goes straight (20%). And keeps going straight (30%). And then suddenly stops. The one on the tiller is confused, asking him or herself: ‘How the f**k did this happen?’
Meanwhile the rest of the crew grabs the nearest barge pole, and manoeuvres the Finch back in the right direction.
After an hour on the tiller it feels like one has done an eight hour shift, without a break.

Cruising means one crew member on the well deck, inventing new hand signals by the dozen, to point out to the one on the tiller what is heading towards him at the next bend. A second crew member on the stern deck, keeping an eye on the starboard side of the boat, at bridges. Both these crew members have a barge pole right in front of them. 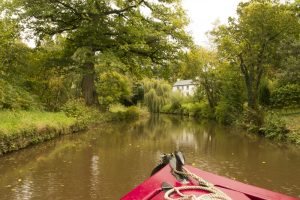 Does it end here?

We’re on the Monmouthshire and Brecon Canal in South Wales. To tick off another canal on the map. And no, we will not do the entire canal. Progress is slow. It’s shallow, crooked, full of leaves, full of hire boaters (yes, I know). 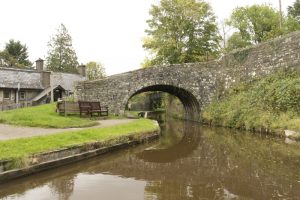 Most hire boaters don’t realize that leaves around the prop is slowing them down very much. And none knows the remedy (engine in reverse for a short moment).

The canal is fed by the river Usk, and going upstream is just that. At one time Mick passes moored boats on full throttle, and we’re nearly standing still. And just during this week CART is closing a pound for a day for inspection and repairs. But for our statistics we consider the canal done completely. 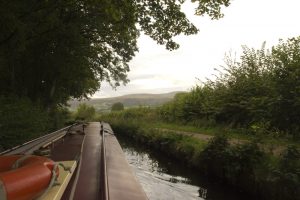 I know, although it doesn’t look like that, the canal actually is wider than the narrow canals elsewhere. So we encounter ‘widebeams’, well, half widebeams. Hireboats with bow thrusters, and sometimes even a jacuzzi on the well deck. All the boats of this hire boat company emit a lot of blue smoke. Another hire boat company only has electric boats, so some of the most beautiful mooring spots are blocked for us because of the charging point, placed just there. 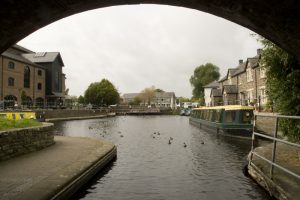 There are enough pubs alongside the canal to enable us not to do any cooking. And except for steering, the biggest task every day is turning the dinette into a double bed.