Light at the end AND inside the tunnel

It’s my turn to do the Preston Brook Tunnel (and the Saltersford Tunnel and the Barnton Tunnel) today, while Lawrance decides to stand on the bow with our torch. And making pictures. The torch really helps, I can see a lot better now in the tunnel. But then, to my surprise, I see the torch (and Lawrance) walking towards the stern. And I can still see a lot more than before. How strange. When he climbs up the stern deck Lawrance explains it: our tunnel light is bright enough, but only if it is shining up, towards the tunnel, and not down onto the bow deck.

But I still find it difficult, the first part of a tunnel. The outside wall painted a very bright white, the first metres inside the tunnel seem to be extra dark. Especially when the sun is shining the contrast is enormous. So I usually hit the wall, once inside. And a bright sun doesn’t exactly improve the sight once you’re in a tunnel. The light at the end of the tunnel is almost blinding…!

Lawrance is doing the Dutton Stop Lock this time, but I have to negotiate the sunken barge, right after the tunnel. Which I do with a big smile. 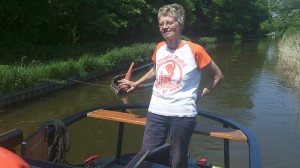 Negotiating the sunken barge with a big smile

We pass Action Bridge, do the other two tunnels (that are a lot easier with our now proper focussed tunnel light) and stop at Anderton Boat Lift. Unfortunately to late to see the lift in operation, but perfectly on time to go to the Stanley Arms for an excellent supper. Again al fresco, of course.