Oxford. Well, what should I say… Lots of wine, lots of good food, lots of miles to walk, lots of hours in museums, and the shortest cruising day ever (with two locks). 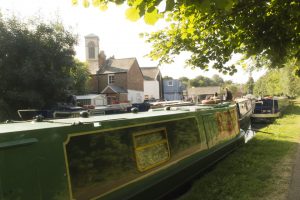 To start with this shortest cruising day: we go from one 48-hour mooring to another 48-hour mooring. Three quarter of a mile closer to the city centre. To do this we need to turn around. Which means we have to go on the river Thames. 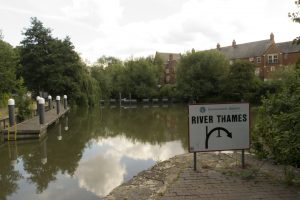 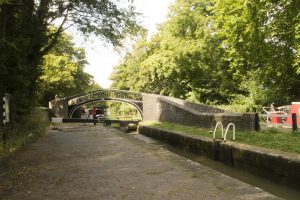 But we only turn around on that part of the river, and go straight back into the lock we just left. Still, to me that counts as two locks (for me, Lawrance is on the tiller). 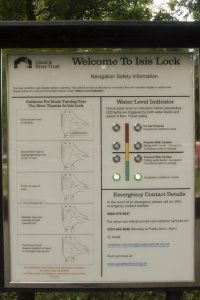 Instructions and Notice Board

This second mooring is in Jericho, so did we go to Israel? No, don’t worry, Jericho is a posh part of Oxford. 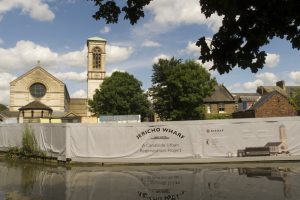 According to the prices at a real estate agent, in Jericho a small house in a row costs double the amount of my big end-terrace house. And for the price of two cups of latte I can buy about four big jars of Douwe Egberts coffee (which would last me at least about four months).
And talking about being out of the country… while we’re at The Punter (a pub on the Thames) with Ann and Mick, who are moored just outside the pub (as you can see), we think we’re in Venice. Heaps of gondolas on the way home, all going into Osney Lock. No, we’re NOT drunk (yet). 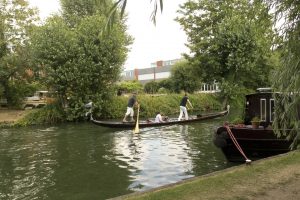 While Lawrance does the laundry (and visits Mick and the pub on the way back) me and Ann spend five hours in the (combined) Museum of Natural History and Pitt Rivers. I already spent three hours in the Ashmolean Museum, apparently the oldest museum in the world.

We have a meal in three pubs. One is The Anchor, close to bridge 240. That’s a waste of time and money. It’s expensive, and just crap.
On Thursday we have a meal in The Perch, across Port Meadow. This is a perfect place, just as you imagine a country pub/restaurant should be. And the food is great.
The other meal is in the already mentioned Punter. Cheaper, but also very good.
Oh, and the fourth meal is at Ristorante WRT: Mushroom Risotto.

But every time I’m in a town of city I realize: I’d rather be in the country. So after five days we’ll move again.

We’re on our way home…