I did it! I just arrived at Stafford Boat Club, after nine days of cruising, doing 61.5 miles and 44 locks. This was the last of my single handed cruising days. 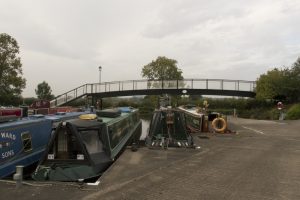 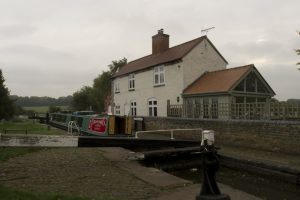 Last Lock on my Own

I could do the things the way I want them to do. Stay at the front of the locks, thus avoiding catching the cill when going down, or get the rudder stuck when going up.
Well, Linda told me that was the proper way to do anyway. And the new front fender does exactly what it is supposed to do: fend the boat off the lock gates.

I could do things when I wanted them to do. Like starting at 07:30 hrs, when the wind is still asleep. And moor up when everybody else starts cruising. Plenty of mooring space, and me ready for lunch.

What I didn’t like? Having to do all the things every day. With Lawrance on the boat it’s a matter of one day on – one day off. One day daily checks and tiller, next day off. OK, that next day I would have to do the locks, of course.
One day doing the cooking, the next day doing the dishes.
But I assume that, if I was on my own all the time, I would cruise one day and stay put the next day.. Not that this would solve the cooking/dishes chores…

I found out that single handed boating is a very alphabetical thing.
F before R – Take the fenders off before you take the ropes off. Otherwise you start cruising and the first thing you notice is the one fender that’s still on. And cruising with fenders on is bad practice.
G before P – Open the lock gates before you lower the paddles. Otherwise you climb down the ladder, jump on the stern deck, put the throttle in forward gear… and realize that you forgot to open one gate. (Climb back on the roof, climb on the ladder, open the gate, climb down the ladder, jump on the stern deck…)
Bad practice, because the roof is wet and slippery, the ladder is wet, slippery and very awkward. And one isn’t the youngest anymore either.
P before S – Have a pee before you start. I know (thanks, Ian for the tip) that I can stop under a bridge, without WRT drifting off, to get my water proofs that are in a unreachable place. But using a stop like that to go to the toilet? No, that is still a bridge too far.
I never found a way to remember to put the tiller to the side when WRT is in a lock an I’m off the boat. Any suggestions are welcome!

Of course I was extremely lucky with the weather. No strong winds. Except for when I had to get out of Swanley Bridge Marina. I actually had to wait until after supper, when the wind got a bit less. 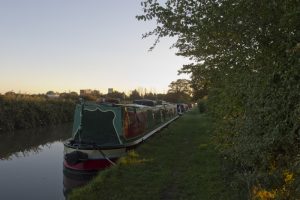 Just out of the marina

Other than that, it always got windier after I had moored up for the night.
But it was a bit too hot. It’s October, so it is a bit chilly in the morning. Hence the thermals every day. So at every lock some clothes end up on the engine room floor. And by the time I moor up it’s over 20°C again. 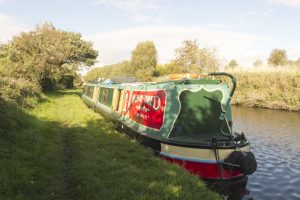 After mooring up – At Acton Trussel

What I found the hardest, doing single handed cruising? Mooring up.
I would either put the middle rope on a ring, or on a nappy pin (that I attached to the middle rope every day before I started).
That middle rope needs to be tight, because as soon as you try to moor up, at least ten boats will approach from all directions. Mostly (too) fast going holiday boats, or old deep drafted boats.
If there are rings WRT is usually too long to fit. It’s a matter of mooring up with a single line. So temporary single line on the back, loosen middle rope a bit, temporary single line on the front (hold on to the middle line because another boat is coming screaming past), loosen front rope a bit, pull WRT back (to have enough rope on the back to moor up properly) etc. etc. 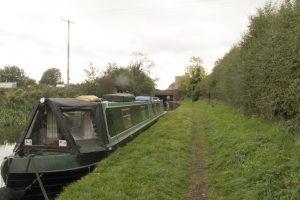 One ring – one chain – At Gailey

Running 20,000 times up and down a 60ft boat is quite a distance. Especially when your body realizes that you are going to stop, and immediately decides to fill a bladder to the rim, instead of waiting ten minutes.

So then, would I do it again? Would I encourage Lawrance to go on golfing trips more often?
Yes, I certainly would. I had so much fun. I just could not stop smiling, trying to get out of a lock with one gate still closed. And seeing an old woman running umpteen times from front to back of the boat, trying to pull eighteen ton, that must have been absolutely funny…

The past nine days also reminded me of when I travelled through Australia for two months on my own. When on your own and doing something other people don’t do, everybody starts talking to you.. “Are you on your own? Where are you from? Do you like it?”

“OK, if you would be so kind and close the lock gates, I will jump back on the boat, and start moving again. I still have to do some miles and locks today, you know. Thank you for your help. Have a nice day!”

* Halcyon Days
1 – Period of calm weather, when storms do not occur.
2 – A past period that is being remembered for being happy and/or successful.