It’s hard to believe that I’m out cruising for almost three months now. Not that it feels shorter or longer, it just doesn’t feel at all.

Although enough happens, in a month’s time.

I became ¼ boater.
You’re only a proper boater once you’ve fallen into the canal. Well, it was going to be a hot day, and I decided to wear my walking sandals instead of my walking shoes. As I set off the stern of WRT didn’t come close to the side of the canal (the Shroppie Shelf), so I stepped back onto the gunwale.

Slipped off and went into the water…

I still had both hands on the hand rail, and because I got a lot stronger over the last months I only went in knee deep. And I managed to haul myself back onto the gunwale.
I suppose that makes me ¼ boater…
No, I don’t think I will wear my sandals again.

Although it is still very hot, during the day, I manage to finish polishing the boat.
She looks absolutely brand new!
For a while, because I must have gone through a desert, just after it rained. All the sudden I could not see through the windows anymore, and WRT definitely had a sandy layer all over.

Met up with some former neighbours from the marina, Carol and Roy.
I was moored between bridge 8 and 7 on the Shroppie, they where between bridge 7 and 6. They moved.
Time to catch up with all the gossip! 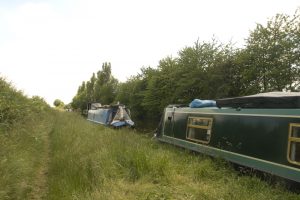 I do early starts. So I am the first one to face fallen trees. 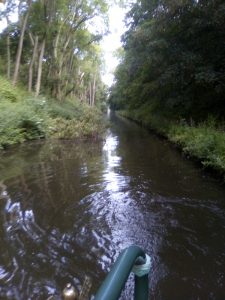 I just managed to squeeze past. Don’t forget, at the towpath side of the canal is that Shroppie Shelf, and you don’t want to get stuck on that…
As I came past, and saw the state of the tree, I realised: that must have been there for a while.
And yes, I know, the picture is not good. But I took it with my phone while I was steering WRT through a bend.

I had very hot days, and days with very strong winds. I just managed to moor up at Gailey (with help of my neighbour).
Got a message from Chris about her new plant pots. Found out there was a garden centre just 500 meters away. So out came the cauldron, and I suppose everybody now thinks: Must be a Dutch boat! 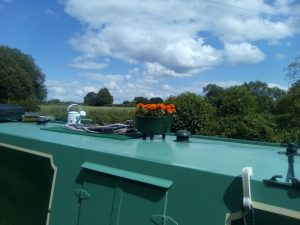 Must be a Dutch boat

Yes, I have moved it, just after I took this picture. I realised it might be in my way, walking on the roof when doing a lock.

I also had troubles with a lock. Boggs Lock, to be precise. Only one paddle to fill the lock, and a HUGE gap between the bottom gates. The water went out quicker than it went in. No way I could open the top gate on my own.
But just as I started to walk back to WRT to put her close to the lock to be able to use my front line and WRT to open the gate, another boat showed up. The three of us managed to open the gate.

The state of the Staffs&Worcs is just awful.
Grass has not been cut since winter. So doing a lock after a night of rain means walking through knee high grass. And getting absolutely soaked from feet to knee. You hope you won’t stumble over a bollard, because you can’t see them.
And touching up rusty spots that are lower than, say, the windows, is impossible. Unless you cut the grass yourself…

And I had another day with very strong winds.
BBC weather said: Light clouds and a moderate breeze. Which in reality means: Heavy rain and gale force winds.
I’m getting close to Penkridge, and I just have to moor up. Too windy. Unfortunately there is only one space left: under a tree.
And what I think are branches, falling out of the tree when the wind really gets strong, are birds…
Sick birds, because the dropping look and behave like tar. 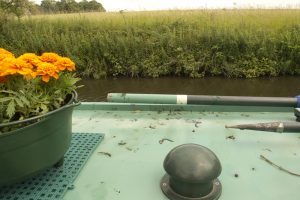 So the next day, after I stop, I have to scour the ENTIRE roof (plus everything else, bar the blue tarpaulin that has the coal in).
Yes, scouring, with a scouring pad, and my nails. Later I get a tip from another boater: put towels, soaked in water, over it and let the tar get really wet. Then it is easier to remove. Whish I had known that…
Well, initially I waited for the rain, before I started to clean it. But of course, that day it didn’t rain.

Anyway, after running aground twice within 10 minutes after setting off, I do one lock, and moor up at Stafford Boat Club.
Time for hair dresser (it’s SHORT again!), a visit to Stafford (never been before), bread, laundry, cassette, water etc.
And going for a drink to the bar, every evening.

And now you think I use my bus pass for going to the bar, remembering this blog’s title.
Eh, no. The title refers to how much I saved, using my bus pass to go into Stafford. I saved £5.20!
My first reaction was: That’s about half a bottle of my favorite wine. I’m going again tomorrow! Just to save another £5.20, and on the way back buy a bottle at the Coop.
Unfortunately bus 74 doesn’t run on a Sunday…