It’s Christmas Eve: shopping done, Christmas Dinner prepared, WRT tidied up, us showered and shaved (well… him, not me. I’m only showered), ready for the big day.
And no, we won’t have a white Christmas, that’s for sure. It’s raining all day.

The next morning I find out that Lawrance has rearranged the entire boat.
The Christmas tree is now on the table. And underneath are all his presents for me.
So I put mine underneath as well. 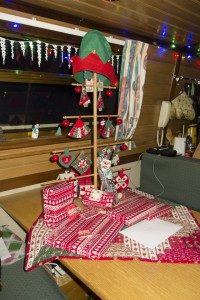 At two o’clock me and Lawrance get ready for a quiet Christmas Day. Yes, I did send an invitation for a get together, but we think nobody will show up, because of the heavy rain. 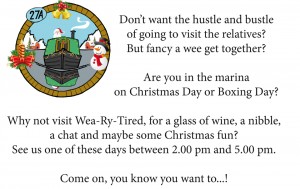 But about fifteen minutes later… knock, knock! Ann and Mick, a Scottish couple from two jetties up. Then Maureen and Dave, our back neighbours. They are all soaking wet, even though they only have to walk between one and two boat lengths! Lynne, Sally and Norman are the wettest: they live about 50 metres away from us. Luckily for us there are no more visitors: WRT is only big enough for ten people in total.
We all have a terrific Christmas Day. And evening, because the last ones leave just before midnight! At that time it is still raining… 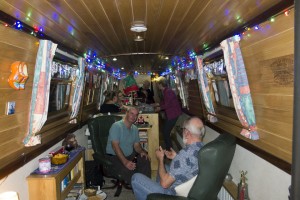 Christmas Day get together

When we wake up on Boxing Day WRT, for the first time since we have her, is level: she doesn’t tilt anymore. And doesn’t rock or move either. Lawrance tells me I’m in for a shock when I get out of the boat. Well, in fact, I nearly bounce off the jetty and end in the water: the jetty is 6 inches lower than usual. Because the water in the marina is 6 inches higher than usual. 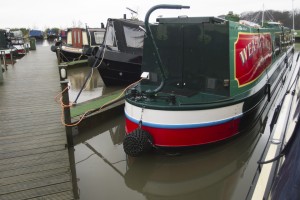 We spend the entire afternoon loosing off mooring lines of about 100 boats. 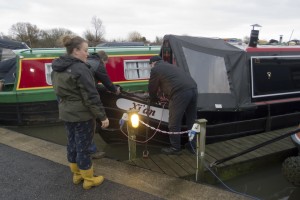 All these boats are dangerously tilted. And some are even lifting up part of the jetty. 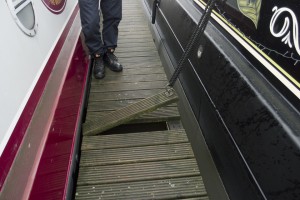 I know, one thinks that we, who live on a boat, are OK when everything gets flooded.
Well, it’s not a problem when it is still raining, it’s all about we’re you end up when the water drops. I found some pictures on the internet, taken by River Canal Rescue
(the boater’s Wegenwacht/ADAC).
You don’t want this to happen to your home. 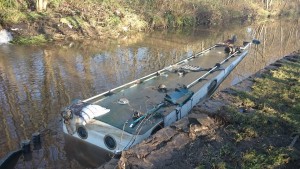 And this looks like a nice spot to live, but it might be difficult to reach by car. 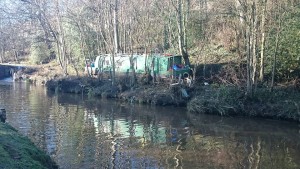 Later that day Carol and Roy visit us for a while.

The next morning the water level is back to normal. WRT rocks like hell, with her mooring lines loosened off, but we keep it that way. In three days we will get another deluge…