Well, it certainly has it’s price, all the work I’ve done so far. Since I came back from the UK in February I lost 4.5 kilo (that’s 0,7 stone). So Lawrance has to cook a lot of good food for me during our holidays, otherwise… 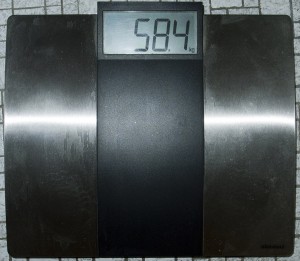 And he also needs to buy me some new crocks. Because of all the walking I did on the tiles in the living room and kitchen, and the concrete in the cellar, my crocks turned into slicks, and one crock didn’t survive at all. It was painful but I had to bin them… 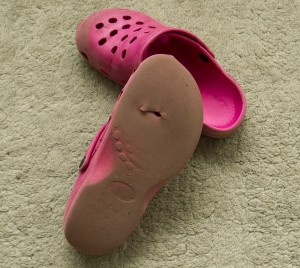 These will stay in Holland

Last Tuesday Lawrance was in IJmuiden, to ship back to the UK with a curtainsider. The pallet that we assembled on the 13th was still there, so I took the opportunity to take another 6 boxes to IJmuiden. One pallet is one pallet, with 6 boxes or with 12 boxes on it. I also added my melodeon and my concertina to it. A sun hat I bought in Australia and a wicker basket with my medical records and my diplomas would go to the UK in the cab. Hopefully the Border Control people won’t start asking questions about these (femalish) items. 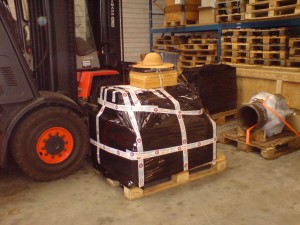 Driving a truck with my high heels on…?

And guess what? On my way to IJmuiden I get a phone call from the guy who takes care of renting out my house. Would it be possible for a couple to view the house on Friday? Yes!!!

I made an appointment with the people from the Second Hand Shop for the 29th. Everything that on the Monday night is not sold via Marktplaats will go to them. It turns out that just during this last two weeks I will sell almost more things than all the time before…

I also tried to make an appointment with the people from the Council, to collect all the non-valuable stuff, like my seat and sofa’s, mattresses, a ladder, basically everything that is left after the Second Hand Shop collected the things they can use. When I told the Council what to collect, the lady said:
“Well, a seat and two sofa’s, that will be your maximum for that week. You need to make another appointment for the week after that.”
Maximum, I thought? Never heard of. This is going to mess up my planning. I told here that by that time I would be out of the country. So the only thing I could do was make an appointment for the next day, and get rid of everything except the seat and sofa’s, and the small mattress I’m currently sleeping on. Because I’m too old to sleep on the floor for two weeks, so that mattress has to stay. I still have to find a way to get rid of it.

And it’s not only the preparation for moving to the UK that I need to do, I also have to work for one of my clients. It’s still very sunny, every day, and working with my computer on the breakfast bar is not a success. Too much reflection from the window, and the wicker seat is way too low. So I move the computer to the kitchen worktop. And sit on an old stool. That’s too low as well, but with one of my grand foulards I manage (if I don’t work too many hours in a row).

In the mean time I keep putting stuff in banana boxes, and by the end of the week my office is completely empty, as is the small bedroom. There are 12 boxes in the DIY cellar, the other cellar is empty. I’ve sold one set of golf clubs, a painting, 7 books by Diana Gabaldon, and Sunday afternoon a guy collects my fur coat. An hour after he left, the phone rings. The same guy: Would it be possible for him and his wife to have a look at the house? He liked the spacious living room, and the spot of the house. Told his wife about it, had a look at the internet and decided: they would like to see it. Yes, why not?
It’s now almost twelve o’clock local time. I’ve already visited one of my clients to take back the entrance card for their office, sent emails to people who want to buy my beds via Marktplaats. The one who wants the small bed also would like to have the mattress, so it looks like I end my time in the house on a self-inflatable mattress.
I really wonder what else will happen this last week in Doorwerth…