The engine room once more

Not only did I spent days in the engine room with Simon, I also spent over a week in there on my own, scraping of the red and off-white paint that Lawrance hates so much.

I think the former owner wanted to turn the engine room into a traditional boatman’s cabin, hence the red paint. And the off-white was probably an undercoat for things to be grained*.

Lawrance absolutely hated the red and off-white, and since we couldn’t find anybody to redo our engine room, I decided to get rid of the paint myself. Lawrance had already scraped off ¼ of a cm, to see what was underneath the paint, so I knew it could be done.

Paint stripper and tools bought, I started with the beading at the gunwales, followed by the door posts and the curved beading against the sealing.

When we first got WRT I didn’t mind the red paint. It was nice and bright. But now, with the original sapele back, I must admit: It does look better.

And now we probably found someone to redo the engine room. It’s Ray, who fitted out WRT in the first place. I think he was glad to see the curved beading against the ceiling back to sapele, but all the other, normal pieces of wood (and the cupboard doors) will be replaced by new panels. At the moment we’re waiting for his quote, but the engine room will look fine. 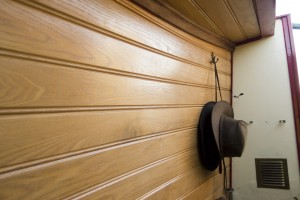