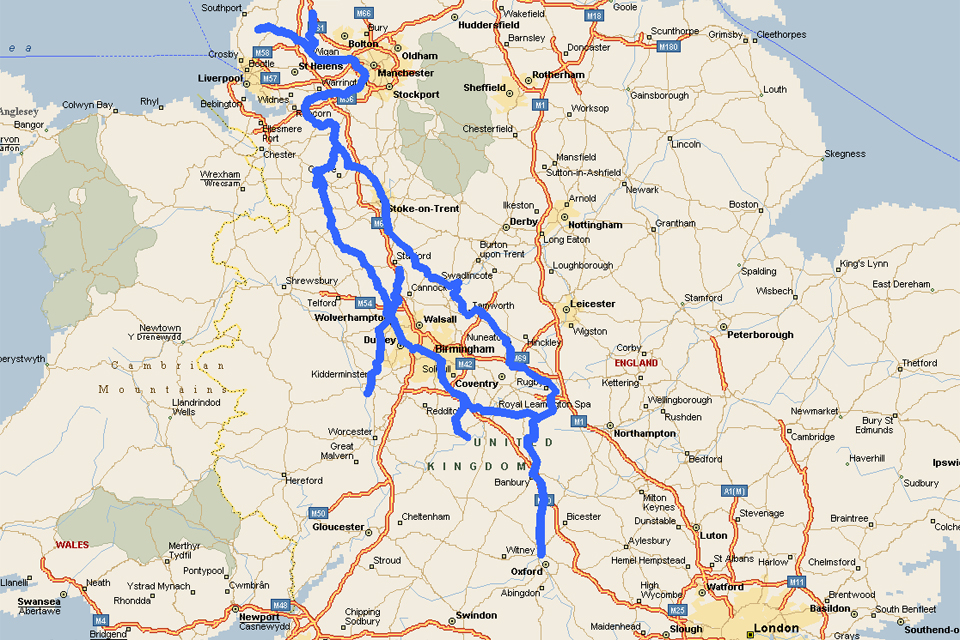 Yes, the old trucker’s route program still comes in handy. At least I can see now were I’ve been…
But first the statistics. Without the time spent in the caravan at Swanley, of course.

And now for the weirdest.
The maximum speed for a truck is 56 miles per hour. A maximum driving day for a lorry driver is 10 hours. So Lawrance could have done this in just over one day…! In certain circumstances Lawrance would have classed that as a relaxing day.

Can you imagine the problems I have to grasp our travels? To realize where I am, in relation to car distances, distances I’m more used to?
Take, for example the little village of Brewood. It’s about 5 km south of Wheaton Aston, or about an hour cruising. On the 27th of April we cruise from Wheaton Aston to Coven. When we walk into the village of Coven I notice the name of the road we’re walking on: Brewood Road.
Yep, it’s the same Brewood. From the bridge over the canal at Brewood to the bridge over the canal at Coven took us roughly from 10:15 hrs till 15:15 hrs.
By car it’s only eight minutes. OK, I got stuck in the stop lock at the end of the Shropshire Union Canal, had to slow down because of the narrows, and got grounded next to the dredger in the Staff & Worcs Canal. So it is a relatively hard and long day, but I’m still only nine kilometres (as the crow flies) away from Wheaton Aston.