That’s what they should sell here.

We’re at Kinver, on the south Staffordshire & Worcestershire canal. And it feels like being in the Black Forest. Green hills, small valleys with one or two houses.

But let’s start with what happened before we came here. 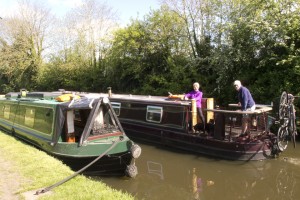 On Saturday we said goodbye to Ann and Mick. Although it’s my day on the tiller, it is sunny. But with a cold wind. I’m the lucky one to deal with the narrows again (On the (not so) Straight and (f**g) Narrow). This time Lawrance has the two-way radio with him. Probably the reason why there is no oncoming traffic. And there are no dredgers.

After Autherley Junction we’re on new territory. The Staffs & Worcs Canal is still beautiful. Tree-lined (therefore a bit cold), but clean, charming and very quiet.
We spend two days at Compton, for shopping and laundrette.

The next day it’s Lawrance’s turn on the tiller. I have to do the locks. 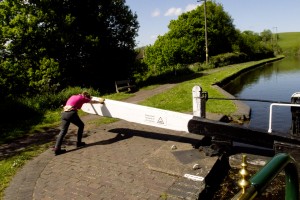 We have 14 locks to deal with, two of them being our first staircase lock. Most of them are in walking distance from each other, so in the end I walk about 3 miles. Not a problem in this nice weather.
But it is a lock too far for my safety boots. After 13 years they are gone… 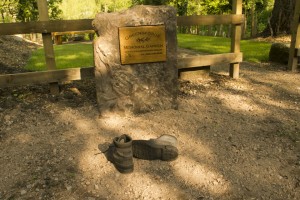 These boots are no longer made for walking

At Bratch Locks there are lock keepers. 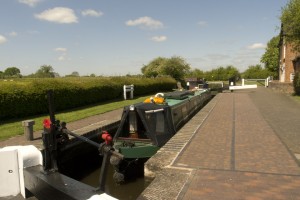 Which is good, because these locks are a bit awkward. They are three separate locks, but there is only about a metre between the locks. No space to pass oncoming traffic, and no space to stop to do the next lock. 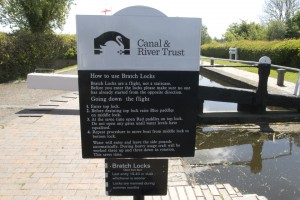 We stop at Greensforge Services for water/garbage/cassette, and drinks and a meal at the (very good) Navigator.

The next day we head for Kinver. I’m on the tiller, Lawrance only has to do 6 locks. 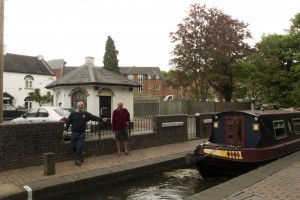 Some off them are really narrow, but they all behave very well. After we moor up clouds are gathering. Will we have rain tomorrow? 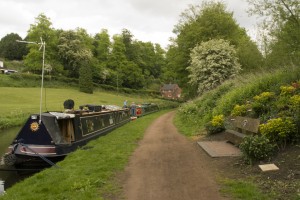 Kinver in the Black Forest