Naked men at the canal

It’s a beautiful day, the sun is shining, and there is only a light breeze. Just about perfect to go to the nearest pub, the Saracen’s head, in Halsall. According to Google Maps it’s a 2 mile walk (including getting out of the marina), but it certainly feels longer, especially after a couple of drinks.
We’ve done it two weeks ago.

But this time we decide otherwise: we take WRT! We can have a drink, have a meal, stay overnight. And we cruise…!

So we do (some) pre-cruising checks, disconnect shore power, start the engine and take in the lines. Slowly Lawrance moves us away from the jetty, and manoeuvres towards the exit of the marina. Time to sound the (not checked) horn, to warn boats on the canal that we’re coming out of the marina. Luckily for us there are no other boats, because… the horn doesn’t work. Silently we get onto the canal, and turn into the direction of Liverpool. 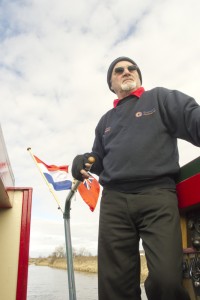 Are we having fun?

As soon as we’re on course, I roll myself a cigarette, and realise: I’m running out of cigarette paper. I should have taken some spare ones with me. This thought is immediately followed by: Silly cow, you’ve got your entire house with you. Spare papers are in the cupboard underneath the TV.
It might take a while before I get used to having all my belongings with me, not just my handbag (with the kitchen sink, as Lawrance always tells me).

Except for the horn, everything works properly, and after about 40 minutes we’re at the Saracen’s Head. On the wrong side, of course, so we keep going till the next winding hole. Lawrance does a perfect job, turning around. In fact he does it a lot better than during our holidays in 2013 (see Towards Middlewich and back), but this might also be with some help from WRT… 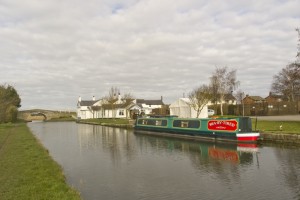 At the Saracen’s Head

After an hour we’re moored up at what is basically the start of the Leeds and Liverpool canal. A commencement ceremony was held here at Halsall on 5 November 1770, with the first sod being dug by Colonel Charles Mordaunt of Halsall Hall.

The men who dug the canals were called Navvies. This is a colloquial shortening of navigator, as in one who digs navigation canals. Next to bridge 25 in Halsall is a statue of one of these navvies, the naked man from the title. No, one can see nothing, he is decently covered by a spade, besides being buried half into the ground. 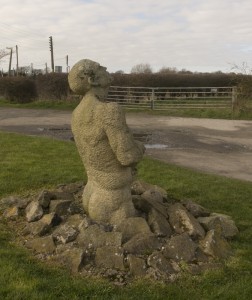 After taking pictures it’s time for a drink. And, some time later, for a very nice meal.
A bit expensive, but certainly worth the money! After providing our own night caps on the boat, it’s time for bed.

As usual I wake up early, and know immediately that this must be MY DAY at the tiller. It’s raining, and there is a gale force wind. We sit out the rain, and while I’m having a cigarette, an old working boat, Ambush, passes us, on her way to Liverpool. 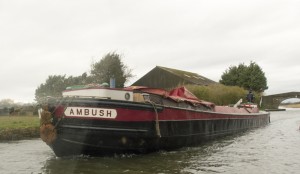 Then around ten o’clock, the rain stops, and we get ready to head home. Fleece-lined water proofs on, furry headband wrapped around the ears, and wearing fingerless gloves, I turn the bow towards the middle of the canal. Cruising in the strong winds is not a problem. One: we’re on WRT (who acts perfectly) and two: the wind is from the back, thus saving us diesel. I’m just not looking forward to get into the marina and on our own jetty. It’s a bit of a zig-zag (mostly against the wind), and there is not a lot of room to manoeuvre. 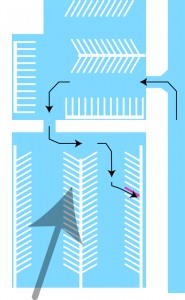 Zig-zag through the marina

But there is no need for fear. As I said before, we’re on WRT, and she behaves absolutely fine. Just goes where I tell her to go. And without damaging jetties or boats we get safely back to our home mooring.

Now we need to find out what is wrong with the horn.

(Addition on 29/03/2015: there is nothing wrong with the wiring, there is a current going into the horn. So it must be the horn itself. Strange, because the horn was relatively new, fitted at Overwater Marina in May 2014…)