But in the end me and her meet at Etruria.~
Best laid plans…

Well, before I meet Swansong, Magda and Lawrance want to tick off another canal: the Caldon Canal. I told them I’ve been there before, but obviously that didn’t count.

So off we go. To another unexpected meeting: Charlotte, from Willow Boat Painting, waiting for me to leave Engine Lock.

Both the Caldon Canal, and it’s Leek branch are dead ends. Magda turns around on the Caldon Canal in gale force winds. Lawrance has to turn around at the end of the Leek branch and reverse a bit, to get me moored up.
Out of mischief I decide not to go forwards anymore, when I’m just a metre away from the bank. So Lawrance goes into the bank full speed reverse, and isn’t a happy chappy. He should not complain. I could have done that in Harecastle Tunnel. 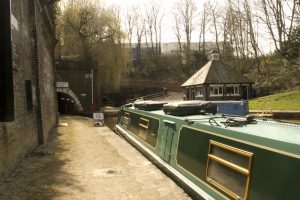 But I could feel Magda was trying to break her previous speed record. Which she did. We managed to get out in 33 minutes, two minutes faster than last time!

While Lawrance is replacing my gearbox control cable, Magda has a leek before going to Leek to buy a leek. 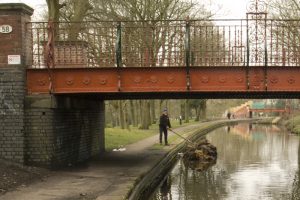 After negotiating the same giant tree trunk as on the way up I’m back at Etruria Museum on the Thursday. And on the Friday, when Magda gets her windlass belt out of my engine room, plus windlass and gloves I know: Won’t be long before Swansong is here. 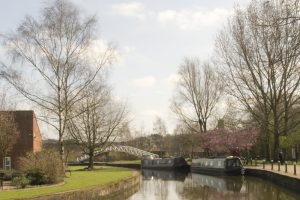 As per usual we just can’t stop talking; we have to tell each other so many things. And yes, we do get some beauty sleep as well (not that we need it).
The ones that DO need their beauty sleep, should have had more. Sleep, I mean, and less alcohol perhaps…