I tucked him away near the bottom of the list, in my previous post. But he is very important to me. Remember my posts about the boat electrics (Secret worries of a novice boater)? Well, for the first time, since we have WRT, we can go cruising without running into electrical problems! And if we would have problems, I would at least have an idea how to solve them.

So what was the problem, and what has Simon to do with it?

Simon is an auto electrician (who knows everything about boat electrics as well. At least he does now!). As I mentioned in my worries post, the batteries are less than a year old. So they should be fully charged when on the landline; and not be empty after an hours cruising. But always, between two and six hours after we stop the engine, the fridge would tell me: “There is not enough power for me”. It would then make a lot of noise, so I would go straight to the switch panel in the engine room and turn the fridge off.
But I don’t have a fridge, just to turn it off. How am I going to keep the beer for Lawrance cold, without a fridge?

But I didn’t have a clue what was going on. In fact, at that time I still didn’t have a clue how our electrics did or should work. But I now have. Thanks to Simon. Who didn’t mind me watching everything he did and asking about everything he did. Four days me and Simon spent in the engine room. And now I probably know more about boat electrics than most of the (male) boaters!

The situation. The batteries are OK. The alternator was a bit corroded, so Simon serviced it, but it was working properly. The external regulator puts a heap of charge into the batteries. The inverter/charger works fine.
So what was the problem? Well, the biggest problem was the battery monitoring system. That gave false readings. It would tell me the batteries would be 11.9V, when in fact they were 12.9V. It would sound the low-battery-alarm, even when we were on the landline. 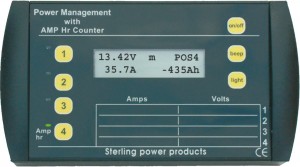 So now we have a brand new monitoring system. With an extra 400A shunt, to be able to monitor what the inverter takes out. It even gives me the amount of electrics we use during a certain period. Which turns out to be next to nothing, thanks to the very energy efficient stuff Andy and Christine put in the boat.
We also have a new 12V DC switch panel. Because that was corroded as well (it’s exposed to the rain when cruising). Unfortunately the guy who made it, made a spelling mistake. He wrote the name of the boat as Wea-Ry-Tyred, so we will get a new front panel, and Simon already showed me how to get the switches and circuit breakers out of the misspelled one. 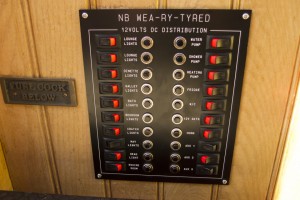 We tried out the washing machine. It only works on the landline, because the engine-mounted generator doesn’t give a pure sine wave, and the alternator gets overheating when we run it from the inverter. Both hoover and hair dryer work off the engine-mounted generator and off the inverter. So my clothes might be dirty, my hair will be OK and the boat clean. 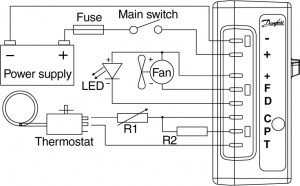 Part of the data sheet

On the internet I found a data sheet of the fridge’s compressor, which mentioned that one could mislead the fridge about the actual charge. Our fridge doesn’t have the R2 resistor in the picture. But by constructing a bridge between pin P and pin T the actual cut-off voltage would be lowered to 9.4V. So I asked Simon if he would be able and willing to try this. Of course he was!

And just before we set sail (weigh anchor…, no, cast off the lines) to go to Crooke Beer, Boats and Music Festival, everything was working perfect. During the festival the batteries were fine, the fridge was behaving and the beer was good (but that didn’t come out of our fridge…!).