A stop at Hawkesbury Junction, and a game of golf at Ansty sees us in Braunston. 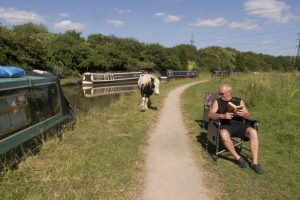 The ‘Orse at Hawkesbury Junction

We need some supplies from Midland Chandlers, and after that it’s time to go for a drink in the Boathouse.

Just across the canal I spot a boat I’ve seen before. They are friends of our friends Pat and Steven. We’ve met them on the Llangollen, last year in December (Not the last cruise).

A nice couple, but both of us don’t remember their name. Phoning Pat is a bit of a hazzle. In order to get a signal I need to climb on one of the tables of the pub, holding the parasol to keep my balance.

And so we meet up with Nina and David. More drinks and a meal follow. As well as the plan to cruise together for a while, as we’re all going in the same direction. 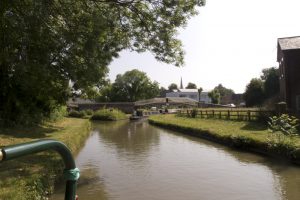 Cruising with Nina and David provides us with a lot of fun, delicious meals (some of them home cooked), and a new drink for me: water kefir. 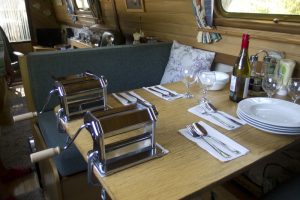 Water, sugar, a slice of ginger, and water kefir grains, make a very refreshing, fizzy drink. The ‘grains’, actually a certain type of bacteria, in a membrane, convert the sugar into carbon dioxide and a touch of alcohol, and the ginger provides food for them. So they grow, and grow, and grow…

This drink comes just at the right moment. It get’s hotter and hotter. Normally I wouldn’t have a lot of choises for drinks. I don’t drink coffee much after breakfast (otherwise I won’t sleep), don’t like tea (and it’s too hot for it anyway), milk is too much protein and too much fat, so the only drink is water. Which doesn’t have that much taste that I can drink litres of it. But with water kefir I can!

After helping Nina and David up the Hatton Flight (Lawrance and David doing the locks, me suppervising Nina steering the boat in and out locks for the first time) Ann and Mick arrive at Saltisford Canal Centre. More fun, more delicious meals and more drinks (the ones I already knew). 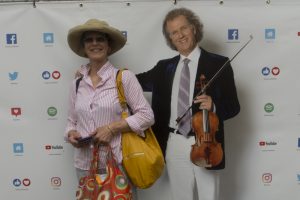 And on the sixth me and Ann set off to Holland, to see André Rieu. Early starts, hours in a coach, 8000 people in Maastricht, late nights, and a lot of fun. 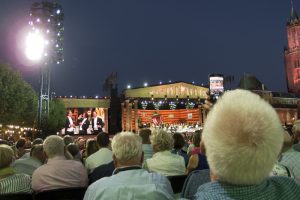 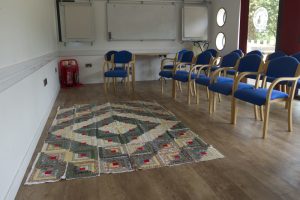 After using the Cedar Room at Saltisford Canal Centre for determine the final layout of my quilt, and a visit of Anita, a friend of mine from Holland, we set off with Ann and Mick as cruising companions. First stop is Leamington Spa. Ann wants to see Leamington Spa.

It’s such a nice town, that we stay another night. See the Carnival Parade (and a car that would fit on a narrowboat), visit the nice park, drink the spa water (bloody salty), and have a look in every second hand shop (of which there are a lot in Leamington Spa). 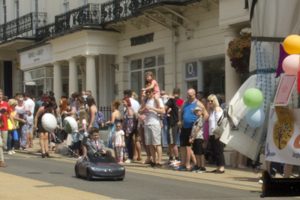 A car for a narrowboat

After a stop at bridge 103, and a delicious barbecue we arrive (again) at Braunston where Ann and Mick turn left, and we turn right. On our way to Leicester. 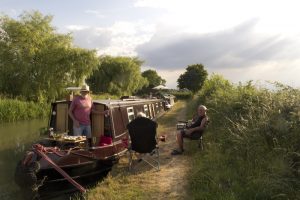 *Sounds like the title of a book: Murder at the Pasta Factory?