It’s a beautiful day. The sun is shining, it’s hot already when we start our final stage. Home tonight?

Well, maybe not. Just as we come out of Pagefield Lock we see two breasted up boats, and a man and a woman with both a rope in their hand. The usual greeting around here is: “Are you doing all right?” And since it also means just what it says, we get an answer: “No. Not really.” So we can but stop. 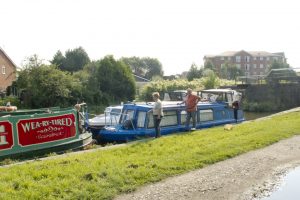 It never rains, it pours. Two boats go out cruising to Lymm. One boat breaks down, so they decide to go back home. They turn around, and just after Pagefield Lock the second boat breaks down. And yes, if we could tow them to Crooke, that would be very helpful.

Me and Doreen start walking, to do the next locks, while Lawrance tows the two boats, and talks to Allan. We both find out that these boats are moored at the Slipway. Are we not going past the Slipway? Yes, and both me and Lawrance decide: we just tow them to the Slipway. We might be home a day later, but there is no problem with that. 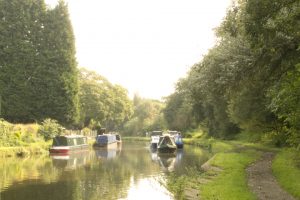 Towing the two breated up boats is going OK until… under one bridge the cruiser jumps against the bridge and the upper structure gets a bit damaged. Not a problem as such. The wood was rotten anyway, and Allan had already ordered a new frame. In order to prefent more damage, I suggest to breast WRT and the cruiser up, and tow the narrowboat. 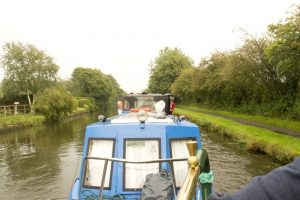 That works fine. For cruising, that is. Not for getting on the towpath to do locks and swingbridges. I do manage to jump off the boats… but I never manage to jump back on! So in the end I walk 7½ mile, from Ell meadow Lock to The Slipway. And did I say it was nice and sunny? Somewhere down the line it gets dark, and it starts to rain. As I said, it never rains, it pours. Cruising through a swingbridge with his convoy exceptionnel, Lawrance manages to get my waterproof jacket and throw it to me. Nice, but I’m already soaked. Luckily it is not cold, there is no wind, so I basically enjoy it. Especially when, during part of one of the thunderstorms the sun shines just through a gap in the clouds, straight onto a tree-turning yellow. The black sky, thunder all around me, and that golden tree… Magic!

Of course I walk a lot faster than the three boats are cruising. So I’m the first at The Slipway. With my BW key, but without money. Luckily Allan already phoned the pub, so when they realize what I just did, I immediately got a beer.

At 20:15 hrs, it’s dark already, I see in the distance one white light, with a green and a red light next to it. I realize: we should have had our orange flashing light on the roof…!

Although the kitchen closes at 8 o’clock, we still get a meal (the kitchen staff is outside the pub, just as everybody else, to welcome the convoy).

The next day, with the narrowboat still attached to WRT, we, and the boat across from us, face the next problem: the swing bridge at The Slipway doesn’t open. 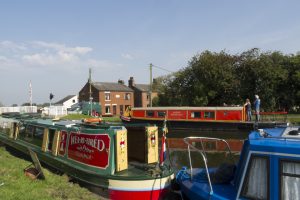 When CRT arrives at noon, we’re finally off. 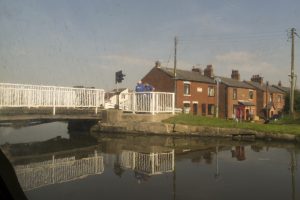 Have to do two more swing bridges, and then, experienced as I am now, I flawlessly moor WRT at our own jetty. Although we have some discussion if we really are at the right jetty. Peppermint Patty seems further away from us than when we started, in Februari. Right, she moved up.

Mail collected, chairs out, meal at the New Scarisbrick Arms.