Stamppot (or vegetable mash) is probably the most favorite dish in the Netherlands during the winter. A combination of potatoes and some vegetables, mashed together, and served with a smoked sausage and gravy. The latter served preferable in a little pit, made in the middle of the stamppot. Sometimes lardons/pancetta (spekdobbelsteentjes) are also used, either next to or instead of the smoked sausage. 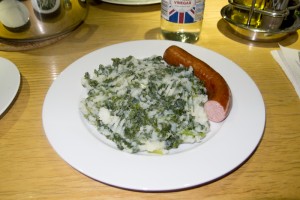 Legend has it that the first stamppot was made by the Spanish.
During the Eighty Years’ War between the Netherlands and Spain (1568–1648), there was a siege of the city of Leiden. In October 1574 the Spanish soldiers were basically washed away when the Dutch breached all the dikes of the polders around the city.
The Spanish left behind the meals they were preparing at that time, cooked bits of potato and vegetables. Until today the people from Leiden celebrate this event (called Leiden’s Ontzet) by eating Hutspot met klapstuk, carrot, potato and onion stew with rib of beef.

Although it is doubtfull that there really was potatoes in the dishes. Potatoes only came to Europe around 1537, and weren’t a staple food straight away. The dish probably contained parsnip (pastinaak), which played the same role as the potatoes would do later. Besides that, according to the Oxford English Dictionary, the Dutch term hutspot is recorded from 1527, nearly 50 years prior to the Siege of Leiden.

Nowadays we make mashed potato dishes with a variety of vegetables:

The recipe is simple. Ingredients (for 2 hard-working boaters):
500 gr potatoes
300 gr vegetables
1 smoked sausage (Mattessons) or 100 gr lardons
25 gr butter
milk (enough to make a smooth mash, or use some of the cooking water as well)

Peel and dice the potatoes, clean and chop the vegetable and place both in a pan*, with the sausage (out of the plastic wrap) on top. Add water and boil the mixture until the potatoes are done.
Take the sausage out and cut it in slices. Drain the cooking water, add milk and butter, and mash potatoes and vegetables together, as in mashed potatoes.
In case lardons are used: fry them in a frying pan on low heat, until kind of crispy. Use some of the drained-out fat in the stamppot instead of milk. 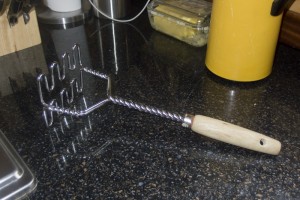 A traditional Dutch potato masher (aardappelstamper) is a bit different from the (plastic) ones in the UK, but, as long as the vegetables are cut in small enough pieces, the plastic UK masher works as well. (Well, almost…)

Also a difference between the Netherlands and the UK is the way you (usually) buy your Curly Cale. The pre-cut and packed Curly Cale you get in the supermarket contains not only the leaves of the cale, but the thick stalks as well. Make sure you cut all these stalks in smaller pieces before boiling the cale. Or go to a farmer’s shop, buy the complete cale, cut it yourself and don’t use the stalks.
Curly Cale tastes better after a night with frost. Because of the frost the cale transfers starch into sugars, which changes the taste of the cale.

So far I’ve not been able to buy Andijvie, not even at the local farmer’s shop. But I found a replacement vegetable: Rucola.
Rucola is not as bitter as Andijvie, so it doesn’t taste the same, but at least it looks the same…

When you get a Mattessons Smoked Sausage you probably get a genuine Dutch smoked sausage. Have a look at the stamp on the package: wonder what NL means…!

OK, enough of this, why not try out one of the following stamppots?

Being Dutch I probably have to stay as close as possible to the tradition, all the foreign readers can experiment as much as they like.
Let me know if you find the perfect stamppot.

P.S. Guess what we have for supper tonight? Curly Cale Hash with garlic smoked sausage.