All I want for Christmas…

…is a few more hours in a day. Because 24 of them is not enough.

This last month seems to consist of wind, wine and work. (And crocheting, but that doesn’t start with a ‘w’.)
Wind certainly was an issue, although WE did cruise to the two boaters club events (see www.bridge-27a-boaters-club.co.uk). But at least our stove is not backfiring, due to the new flue and our new mooring space.
Every day I worked some two hours for one of my clients.
While the numerous (Christmas) dinners made it possible to sip some wine…

Other than that, it certainly is the dark days before Christmas.
So we needed lights, to brighten thing up. And lights we have! One white string of lights in the bedroom. A coloured one in the living area. A white one all around the boat on the outside, and two coloured ones on the roof (I’ll try to take a picture of the boat, later today (weather permitting)). And we are the dimmest boat of all the decorated boats in the marina…

And to cheer us up, I crocheted as much silly Christmas decorations I could find patterns for.  Lawrance thinks I should get more fresh air… 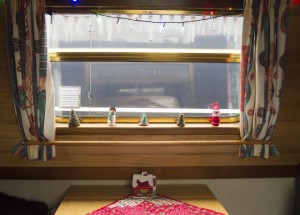 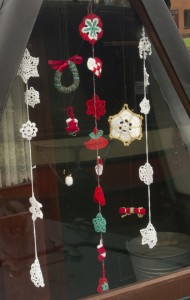 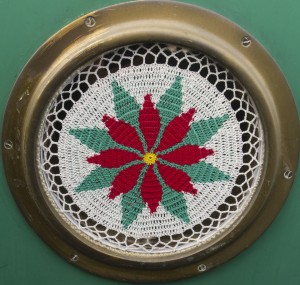 Poinsettia (mind: this is the wrong side of the doily)

As I said, we had two boaters club events, both badly affected by high winds. In Burscough (while I was crocheting a carrot for the snowman) I suddenly saw the building next to the boat start moving. Since buildings usually don’t move, it had to be WRT.
She had come loose from her mooring bollard, and finally got secured with 4 lines and dollies, very secure lorry drivers knots. 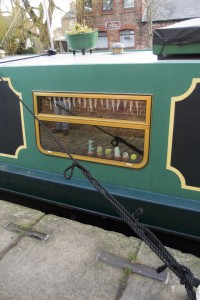 I still remember how to make a dolly

And all three boats that made Burscough were fighting with back firing stoves (both diesel and coal) and high carbon-monoxide levels.

Last weekend the trip to The New Scarisbrick Arms Restaurant started in darkness, but without wind or rain. I was doing fine on the tiller until… the oil warning light started flashing and the alarm went off. The other gearbox oil cooler end cap was leaking. 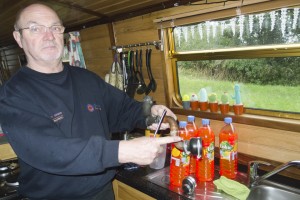 Of course during the repairs it started to rain, and more rain, and… By the time we resumed our journey we were soaked (waterproofs just make you too clumsy to do anything), and the wind was back to hurricane force. With the help of the other WRT we managed to moor up.

The Christmas Dinner was fine, although the two female crewmembers of the Wea-Ry-Tired narrowboats came into the restaurant in wellies (and carried their high heels in a plastic bag). 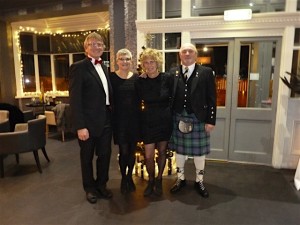 Ready for the Christmas Dinner

And the next morning? No wind, no rain, but frozen mooring lines! 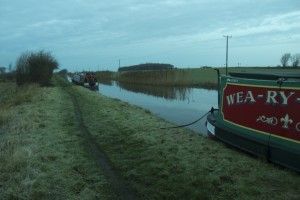 Both WRTs left early, to be home before the wind and rain, that was in the forecast. I was on the tiller again, and in a bend of the canal the two WRTs met!
It certainly made my heart jump… 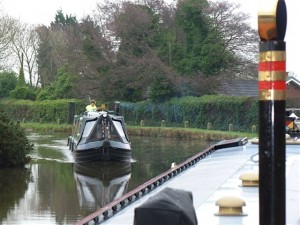 Yes, we have been fairly busy. It doesn’t help when one goes to the hair dresser, and is sent back to get it redone two days later, after one had a shower (that’s another afternoon gone). And meeting fellow boaters on your way to empty the cassette, or dumping the garbage, still means loosing at least a couple of hours.

So no, I don’t want a diamond ring,  or a cruise around the world.

All I want for Christmas is hours…!