And once again it’s a long time ago I had time to write. Basically due to spending New Year’s Eve in Scotland, and getting back home via Marseille (France), Ortona (Italy) and Scotland.

And I had a look into the future: living with next to no possessions. Now all my Christmas decorations fit in an A4-size carton box: 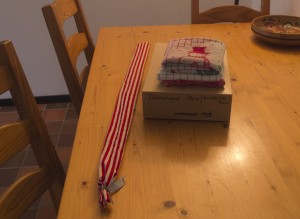 I’m really looking forward to owning next to nothing. It’s amazing how much junk one collects over the years. And, for example, how many books. At the moment I have about 900 books. I think on the boat I will have room for about 100 books. So I have to get rid of 800 books.

Initially I had an appointment with the Arnhem depot of a big Dutch second hand book store. They would buy most of them. But when the guy from the store came to see me yesterday he said the books were too old, and that they were not interested in them. And, as he said, they are bankrupt as of today…! Nobody needs books anymore. And there are the e-readers as well. I must admit, I can live with all my science fiction books on my e-reader, but leaving all my other books behind does hurt.

But I can’t take 17 metres of books with me on a boat that is only 18 metres. So I send my neighbours the following email:

Please help me to get rid of the following books:

Last week I also made a telephone call to the Dutch Tax Department (Inland Revenue).When I move to the UK I need to end my company. But I still have to keep my administration for about seven years. I won’t need a huge safe for it, but my administration consists of seven carton boxes, the size of one for the Christmas decorations. According to the website of the tax department it is allowed to digitize some of it. One only had to make an appointment to ask for the details. But an appointment with whom? No idea, so I phoned the information number for businesses.

“No, I don’t know what you need to do to stop your company. And I also don’t know with whom you should make an appointment.” (What do they mean by ‘information number’?) “I will find somebody and he/she will phone you back in two days, between 08:00 and 11:00 hrs.”

And to my surprise that was exactly what happened. But he was working for the income tax department, and knew nothing about companies: “I advice you to speak with your book keeper.” Well, as a former certified public accountant I probably know more about bookkeeping than most bookkeepers, so I told the guy that I did my own bookkeeping. “Then I advice you to speak with your financial adviser.” Well, as a former etc etc I’m my own financial adviser. “We will phone you back.” End of conversation.

One day later I got another phone call. Again from someone who does income tax and knows nothing about companies. He told me to write down all the questions I have, and send them in a letter to the tax department (yes, I even got an address). Then someone will call me and then I might be able to make an appointment with someone. I fear that by that time our boat is due its second blacking…!

At this very moment I’m at the garage. My car needed its MOT. And guess what happened this morning? The b****y thing didn’t start! Luckily we have the Volkswagen Mobility Scheme, so I got to the garage, albeit somewhat later. I definitely need a boat pretty soon. Everything is starting to fall apart. My oven stopped working about a month ago (no oven, but also no microwave anymore), and my kettle is leaking. Now my car. And I don’t want to spend money on things I have to leave behind soon.

But there is also one positive thing: in 3½ months time we will be on a boat for two weeks. Not OOR AIN but a rented one, for our annual holidays. This time from Black Prince in Napton, a 52 footer. With a conventional lay-out. If 52 ft is (almost) big enough for us, that increases the amount of second hand boats to chose from.

We will cruise the Warwickshire Ring, clockwise. I am really looking forward to it!

After these two weeks it’s Crick Boat show. So we booked a hotel in Hillmorton (Rugby) and will spend three days in Crick. You never know, this might speed things up a little…

Two hours later
What did I say, just two hours ago? Everything is falling apart? I’m still at the garage. And they know why the car did not start this morning: the ABS regulator is gone. It must have taken out current continuously, and thus drained the batteries. A new ABS regulator will cost approximately € 1700 (£ 1500), and that is even without cost of labour. I don’t need things like this for stuff I have to leave behind anyway.

Luckily my garage is a good one. They know about the plans to move to the UK and the future sell of the car. So they realized that I probably wasn’t looking forward to pay a huge amount of money (although I don’t have much choice, have I?). And they managed to find a decent second hand one. That one will cost me about € 1000 less. Sounds a lot better, doesn’t it? And no, it is NOT even the cheapest one. I asked for one somewhere in the middle between the cheapest and the new one. My car has to be reliable until I get on the ferry in IJmuiden.

The only other (small) disappointment is: the regulator is not in stock (no, of course not), without it the car will not pass its MOT (so I have to spend another day here) and there will be a horrible sound when I’m driving before it is repaired.

Oh, why me? Why always the small ones?