The experienced boater will do a quick calculation: 14 locks, that means they must be on the Middlewich Branch.

Well, no. We’re still in the marina. The first We that is NOT me and Lawrance, but it’s actually WRT.
We’re out just means: we’re out of the water, or, even better, WRT is out of the marina. 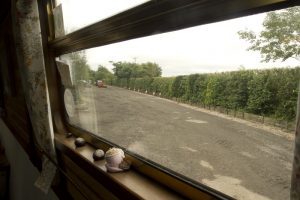 Did we take a wrong turn?

We only moved to a different place in the marina, to get blacked. 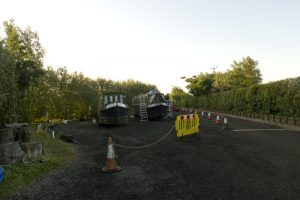 Being out of the water also means new tasks: emptying waste water tanks, first thing in the morning. 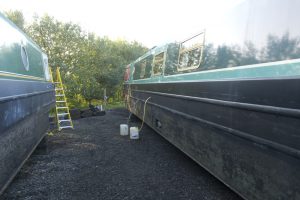 We needed to be blacked this year anyway, so we might as well do it now.
Blacking, touching up the paint, and after that we’re ready to start cruising. 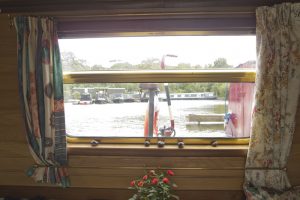 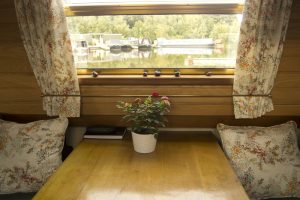 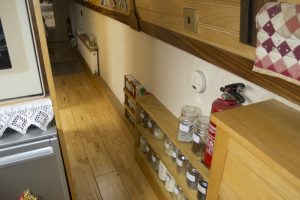 And what about the 14 locks, I hear you think?
Well, Kurt, one of our neighbours in the marina, had to go to Tarleton to get his boat overplated. Since he is on his own, me and Ann helped him through locks and swing bridges. Seven locks up to Tarleton, seven locks back to the marina.

Anyway, although the weather one days is almost too hot to do any painting, and we get drizzly rain some of the other days, we manage to get blacked, and even do one tunnel band. In fact, everything goes so fast, I don’t even get a change to take a picture of the pristine black bottom of WRT before we get back into the water.

At 9 am Daniel starts putting the trailer back under WRT. 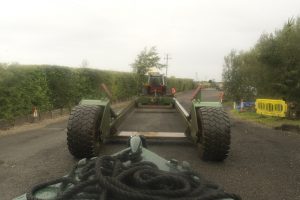 Almost back on the trailer 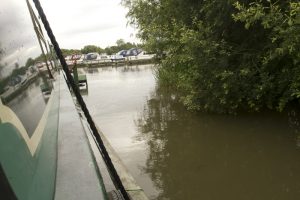 Almost back in the water

Back in the water, and, very important, back to our usual tilt.

When WRT was on the railway sleepers, the bow was is lower than the stern. And with the heavy rain on our second day out, water accumulated at the front of the cabin, where there is NO run off. So after a couple of hours I discovered about an inch of water inside our fire. Only remedy: make a hole in the sealant of the cratch cover, in case we would get more heavy rain.
And when I tried to open my side of the wardrobe, I found out I couldn’t. The floor in front of the wardrobe slightly bulged out, just enough to prevent the door from opening. So now, back at our usual place, I can finally get a change of clothes…

And now, with most of the tasks done, it’s time to start thinking of cruising.