Trust me to run into the biggest fishing competition of the UK. The final of the 2019 Division 2 National.

A staggering 18 miles of Shroppie is lined with anglers, with about 25 yards between each angler.
OK, there are places where there are none, like Woodseaves cutting, or the Tyrley, Adderley and Audlem Locks. And some of the winding holes. But other than that, it’s tick-over from High Offley till Coole Pilate. 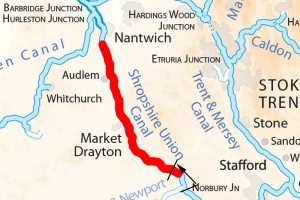 Of course I heard about it. It was held in 2017 as well. But I can’t find an email from CRT about it for this year.

So, cheerful, we set off from Norbury Junction, to get to Market Drayton. It’s nice weather, only a bit cold in Grub Street Cutting.

Just out of the cutting I see fishermen.
Not a problem, there are private moorings on the offside as well, so I’m on tick-over anyway.

After bridge 42 there are more fishermen.
Then my mind clicks into gear: Shroppie – angling competition – today???

I ask Lawrance to go on the internet and find out if this is that day. He doesn’t find CRT’s website, but finds the site of 2017. That talks about 15 miles of fishermen.

When we get to Shebdon Wharf we notice no fishermen at the visitor moorings. And I make a quick decision: we’ll moor up! I managed a mile and a half on tick-over; I’ll never manage another 16½ miles. 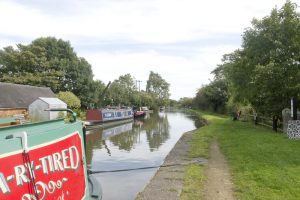 We could probably moor at Gladstone Wharf as well, but that’s another four miles, which, on tick-over, is about another four hours…!

Time to make bread, write this blog and chill out.
It’s a hard day for me: I’m on the tiller, I’m making bread and I’ll do the cooking today…