I’m sitting at the dinette with a view of a lift bridge, and I’m told to feel at home.
We’ll, I guess that’s what CRT means, but whatever they mean, they’re speaking shite.

When going through Grindley Brook Staircase Locks we get a leaflet from the volunteer about the area around Grindley Brook and Whitchurch. What to see, what to do; nothing for boaters, though.

Once moored up in the Whitchurch Arm I have a change to read it.
I will quote a small part of it:

A little bit of history
…
This part of the LLangollen Canal often reminds people of the Low Country, especially since Vincent van Gogh painted a lift bridge very like the New Mills lift bridge at Whitchurch.

Point 1
What do they mean with the Low Country? Written as it is, it’s the name for a region along South Carolina’s coast, including the Sea Islands.
Does today remind me of that? Yes, kind of, because it would be nice and warm in South Carolina at this time of the year, as it was today here.
But the landscape is completely different! 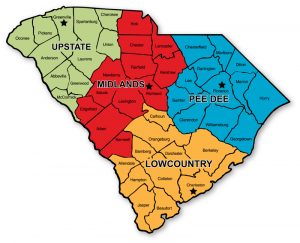 So I presume CRT means THE Low CountrieS: i.e. parts of the Netherlands, Belgium and French Flanders.
Does the landscape around Grindley Brook and Whitchurch remind me of that? Apparently it doesn’t, or I would have mentioned to Lawrance: Oh, this reminds me so much of Holland!
We probably have the same grass, flowers, and trees, and I saw black-and-white cows, but that doesn’t bring tears to my eyes and longings for Holland. 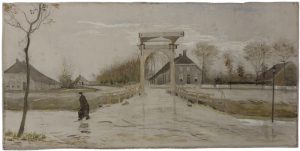 Yes, van Gogh did live in England, but as far as I know he never came to the LLangollen to paint a lift bridge. 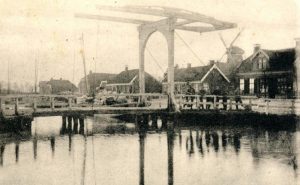 Yes, he painted a lift bridge in Nieuw-Amsterdam, in the province of Drente in Holland. It’s called the Ericasebrug, but it doesn’t look at all like the bridge I have in front of me. 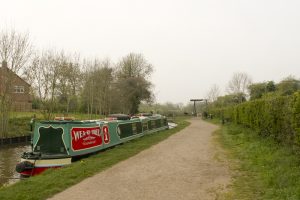 I don’t mind CRT spending money on leaflets for Joe Public, but don’t teach people things that are not correct…