No, we didn’t cruise all the way to the Mediterranean. We’re in Stourport. In the basin, moored up for a couple of days. And, like last year, it reminds me of Venice.

It is awful long ago I wrote something for the blog. Eh, no, let me rephrase that. I wrote some stories in concept, but never got the chance to actually put them on the blog. Reason? Well, no phone signal (so no internet), cruising mostly every day (so no time to do it), meeting up with friends (no time, again). So today is the day to write about everything that happened between the 2nd of May and today, the 9th of July. A lot of things, though, are not interesting enough to turn into a separate post. So I will just mention them here. All the important things you’ve read already, by the time you read this.

As a ‘test drive’ for our big annual cruise we do the Rufford Brach of the Leeds & Liverpool Canal, between the 16th of May and the 19th of May, meeting up with Ann and Mick, who already have left Scarisbrick Marina. With six locks, all with very strange paddle gear, and all need a handcuff key. Volunteers help with lock 1 and 2, but the rest is absolutely difficult. Lock 4 leaks so much… one side is Lancashire, the other side reminds me of Niagara Falls. 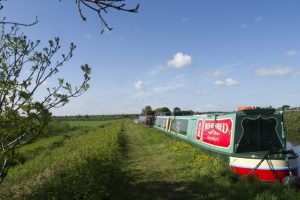 We have a slight problem with our CO-alarm. It tells us to get outside immediately, because we are exposed to 50 ppm of CO for too long. The problem: we ARE outside, as is the alarm. We’re in rural Lancashire so where does the CO come from? 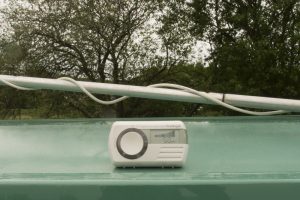 CO outside, in rural Lancashire?

So we decide to buy a new one. If that tells us that we still have a lot of CO in the boat then we have a problem. But no, the old one must be faulty. 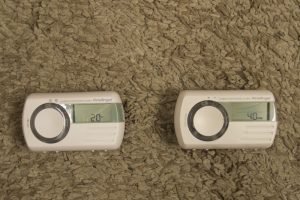 Then, on the 22nd of May we leave Scarisbrick Marina for our annual cruise. Crooke is our first stop,and the next day we meet up with Ann and Mick, just before the stoppage at Vickar’s Hall Bridge. At 16:45 hrs we know for sure: the stoppage is gone. The first two boats coming from Worsely are passing us. We wait till the next day. This gives me a chance to see unusual things, early next morning. Like a swimming deer (that can’t get out of the water), and a giant fish that jumps out of the water every minute or so. 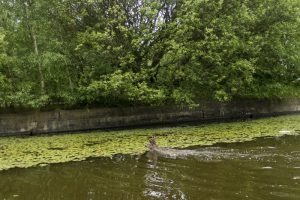 At 09:30 hrs the next morning we are (almost) south of the stoppage. Finally. 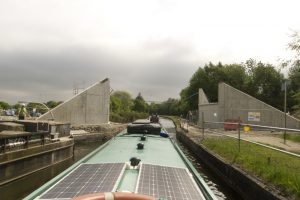 We stop at Lymm, to play golf (next to another canal, the Manchester Ship Canal) and have a meal with the people on the boat in front of us (Ann and Mick, who else?). 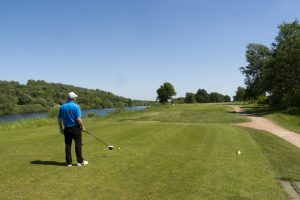 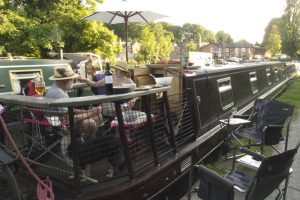 We do spend a night between lock 13 and 12 in Audlem. On our first proper 60 ft mooring ever (the rings are exactly at the right distance). Here I take the last picture with my camera. For some reason I cannot charge the battery anymore. I do buy a new battery, but that doesn’t solve the problem. 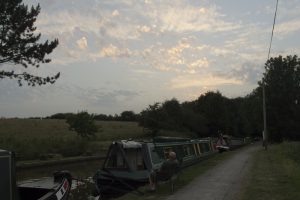 The next day, in the middle of a txt conversation with Christine the English SIM card in my phone stops working.

Once me meet up with Andy and Christine even more goes downhill. We decide to stay for a few more days because the generator on WRT-4 is broken and WRT-4 is an all-electric boat. We can provide an oven or a hub to do some cooking. While there Lawrances phone packs in (not that there is much of a signal at Norbury Junction…). He does manage to get a phone call from a Dutch number, which we think is Elly and Ronald. My Dutch SIM card works OK so I phone them back with that (roaming is cheap nowadays). We meet them at Wheaton Aston and have a meal in the Hartley Arms.

While Andy and Christine turn left on the Staffs & Worcester we turn right. Stop at Compton for laundry and a game of golf. A mink plays on and around our boat, and a fellow boater tells me about a phenomena I’ve heard before but never knew what it was: change ringing*.

Kidderminster ids the first ‘biggish’ town, and has both a Vodafone and an O2 shop. The morning we’re going to Kidderminster I wake up with the idea: it might not be the SIM card, it might be the phone. One way to find out: swap the SIM cards. To my big surprise both SIM cards then work. I swap them back to their original place (giving the contacts a wipe), and both SIM cards still work, two days later. Lawrance is less fortunate. He needs to buy a new phone…

Once my phone is up and running again, I text Pat (the ones who called us crème brûlée last year): “Where are you? We are in Kidderminster at Tesco”.
Answer I get back: “We’re at The Bird at Hand”.
Exactly the place where we plan to be tonight. So we meet up with Pat and Stephen (and sister (in-law) Christine).

Writing all this (and especially that about the wiping of the SIM card) makes me do the same with my phone battery: I take out the (old) battery, wipe the contacts and presto, the camera charges. The old battery is ready for use pretty fast, so to prove this I take a picture of the basin. 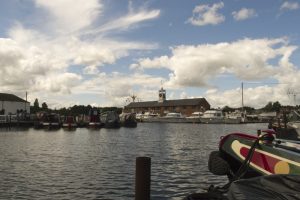 Shit, shit, shit. Our mooring at the church in Kidderminster would have made a perfect front for next years calender (if the picture had been taken with a proper camera). 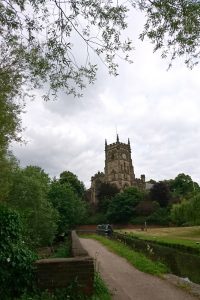 I’ve got no pictures of Norbury Junction, the BBQ, WRT-4…

But at least I’m able to update the weblog. No we didn’t disappear from civilization, civilizations had left us. Now we’re back. Once we’ve played golf at Ombersley Golf Club, gone to the laundrette, and bought our life jackets we’re ready for another river: the Severn, Britain’s longest river. It runs for 220 miles from the Welsh mountains, through the beautiful Shropshire and Worcestershire countryside all the way down to the flatlands of the Severn estuary.

*Change Ringing (Wikipedia): the art of ringing a set of tuned bells in a controlled manner to produce variations in their striking sequences. This may be by method ringing in which the ringers commit to memory the rules for generating each change, or by call changes, where the ringers are instructed how to generate each new change by calls from a conductor. This creates a form of bell music which is continually changing, but which cannot be discerned as a conventional melody.
See and hear: https://www.youtube.com/watch?v=Bix3S52VHsE