Instead of watching silly ducks and moorhens, trying to cope with something that looks like water but definitely is something else, I better write an update.
Because there are many:

Moorhens
Let’s start with the most important update: the moorhens. Usually we see a lot of ducks, but not that much moorhens. In fact (as I found out today), we don’t see any moorhens at all. Because what me and Lawrance call a moorhen (waterhoentje), is NOT a moorhen, but a coot (meerkoet). Moorhens have red beaks, while coots have a white one, with a white patch above it.

Coots look cute, but just read this sentence from Wikipedia:

Coots can be very brutal to their own young under pressure such as the lack of food. They will bite young that are begging for food and repeatedly do this until it stops begging and starves to death. If the begging continues, they may bite so hard that the chick is killed.

Ducks seem to cope better with ice than coots. That might have something to do with the oversized feet coots have. These feet are a lot bigger than ducks feet (compared to the size of the bird) and they don’t have webbing between the toes. When walking on ice the coots waddle like a clown on oversized shoes.
Which, of course, doesn’t benefit their balance. 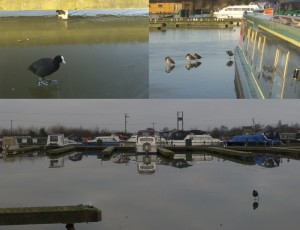 Coots must also suffer from cold feet, because I see them a lot of times either totally on one leg, or in some sort of ballerina stance, like the coot in the lower part of the collage. It might look like he’s ice skating, but no, he doesn’t move.

But whether it’s ducks or coots, I can watch them for hours, when they try to walk on the ice, pick on something in or under the ice, or just stand on the ice.
The reflection on the ice of everything is mesmerizing…

Boerenkoolstamppot
There are some new developments in the ongoing battle to find Andijvie.
From an American (!) website I learn that ASDA in Leeds recently had bought Andijvie. How these Yankees knew I don’t know, but I visited the nearest ASDA and yes, they sell something that looks like a (small) head of Andijvie. It’s called Curly lettuce. Because it is less than half the size of a Dutch head of Andijvie I assume it’s not fully grown, and therefore it might not be really bitter. But I will give it a try.

I also asked a green grocer in Ormskirk about Andijvie. He came up with Frisée, which is the (not so bitter) curly form of Andijvie. I might use this as a last resort.
The green grocer called the non-curly form Biondee, a name I can’t find on the internet, but maybe he referred to Lollo Bionda, which indeed looks like Andijvie. Unfortunately, real Andijvie is of the daisy family (Asteraceae) genus Chicorium, while Lollo Bionda (as all lettuce) is of the genus Lactuca of the Asteraceae. Something completely different, I would say.

And another update on the Boerenkoolpost: don’t use the pancetta  you’ll find at Tesco. It’s much too thin for frying on a low heat. Use Tesco’s lardons, they are a bit bigger cubes. Stil not as big as spekdobbelsteentjes, so I’m still searching for the proper stuff.

Point of no Return
Just a small update on this post: my house is sold! 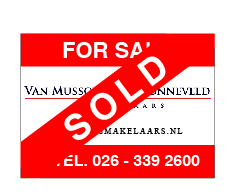 I had one couple viewing the house last Friday, and they decided to buy it. Not exactly for the price it was on the market, but not far from it either. In two days I will get the necessary paperwork, and the transfer will be around May/June. Which will involve a trip to Holland…!

And another delay in cruising…!

One thought on “Update”