Well, the first half an hour, yes. I manage to get my crew ready early, so after a 9:15 hrs start we do a lock and three bridges.
Then just before lock 32, it all comes to a stop. 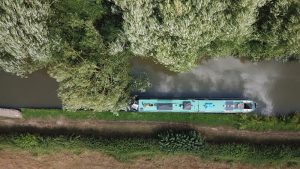 Lawrance wants me to squeeze WRT through (and rip the cratch cover, scratch the windows and take half the paint of the hull).
I says: “No.”
“For once, do as you’re told!”
“No.” 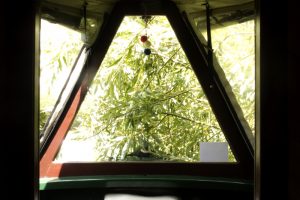 Plants on the gas locker?

Instead I give him a pin and the hammer and ask him to put the middle line on. We are lucky, despite all the greenery on and next to the bank we can just get off the boat.

I phone CRT. The woman who answers the phone tries to put me through to the local branch.
No one there. When she takes the call back she promises me they will phone me as soon as possible.
So we wait.

I see WRT move a bit. Must be a boat in the lock behind us. With all the greenery they can only moor up well behind us. So we tell them, and explain the situation. 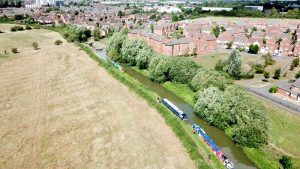 Twenty minutes after my call to CRT the woman phones me back.
“Are you still stuck?”
“Yes” (silly question)
I’ll inform the supervisor.”

Ten minutes later: “I informed the supervisor, and a team is on it’s way.”

Half an hour later two CRT guys show up. Not with tools, but with a phone. They take numerous pictures… and contract a contractor.

When they finally leave there are two boats on the other side as well. One is a share boat, that has to be back at base today! It’s eleven o’clock.

We wait. I have lunch. Lawrance goes to the village to get a newspaper for him and Alan (on the boat behind us). I collect blackberries, Lawrance checks the gearbox and Cath, Alan’s wife, goes to Tesco.
In the mean time two more boats show up, one at each side of the stoppage. On one of them boats, Adam has a drone. So now you can stop wondering if I have learned to fly. Brilliant, such a drone…

Have a look at this video and see the stoppage from a complete different view point:
Fly and see

With a huge crowd present, at two o’clock help arrives. Two young, strong tree surgeons, with tools, and a boat. 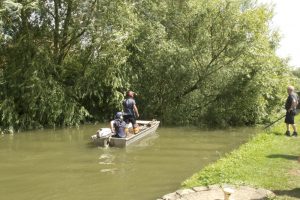 Tree surgeons with tools and boat

They were working about a mile away from us, but had to go back to their base in Sutton-in-Ashfield to get a boat. Which is about 1 hour and 15 minutes driving. One way! 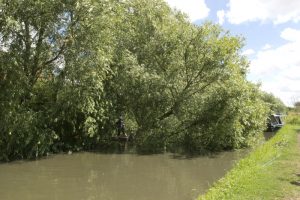 Start of the removal

They start taking the tree apart. It becomes clear to us, spectators, that cutting the branches is not the problem. It’s getting the cut branches out of the way, on the opposite bank. 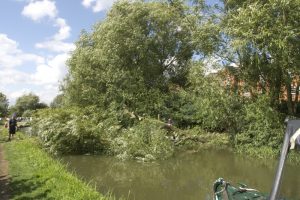 About half the job done 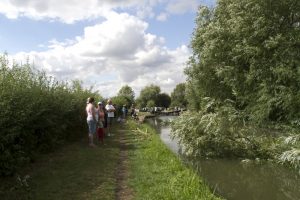 Mind you, they have heaps of people watching them, and it is warm again as well. But they do a perfect job. Especially when we provide them with a cup of coffee. 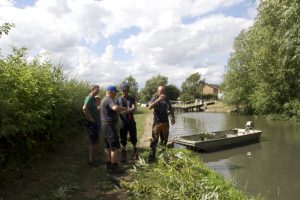 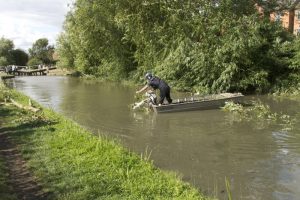 It takes them almost three hours to get the canal cleared. The nearest boats ‘pay’ them with cans and bottles of beer, and we all give them a huge applause. 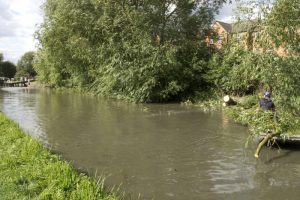 By five o’clock we’re on our way. But as we are all shattered from all the hard work we had to watch, three of us decide not to go all the way to Leicester. 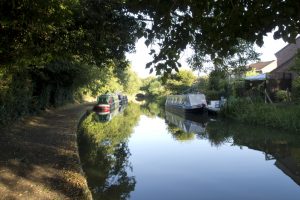 Two of the three in Glen Parva

We do one more lock and stop at Glen Parva. We need a drink. And we are too tired to do any cooking. So it’s two-for-one at Glen Parva Manor House.
Oh, the joys of boating! An 8¼ hour day, in which we do 1½ mile and three locks.