To cruise or not to cruise

It’s Saturday morning. The sun is shining (through thin clouds), the wind is blowing (30 miles/hr), snow flakes are falling.
Lawrance is watching Saturday Kitchen. I’m on the computer.

Was this not the day we planned to start cruising? Yes, it was. But except from some minor things we have to deal with, here in the marina, there is a much bigger problem. 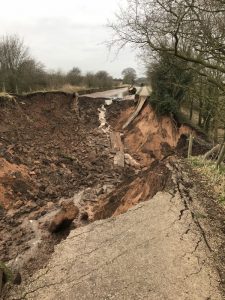 CRT said: As a consequence of an embankment failure the navigation and towpath is closed until further notice.

Small words for a big problem.
For the boats that were moored (well, still are) on this part of the Middlewich Branch. 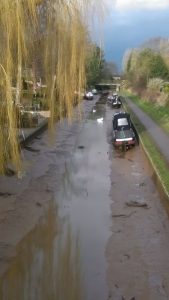 And for us.
Our plans were to head for the Llangollen Canal, to be in Whitchurch sometime around the 18th of April. So Lawrance could go to Blackpool for his army reunion.
Well, that is definitely out of the question. And Lawrance, who just bought his train ticket, has to try to get his money back.

But we also made arrangements to get WRT out of the water in Swanley Bridge Marina, for blacking and a bit of painting. That would be in September, while we would be on a hire boat in Scotland. If the breach is not repaired by then, it means a trip of twenty days at least, instead of six.

And because Lawrance will go to Portugal, to play golf, just after our holiday in Scotland, the plans were for me to take WRT up to Stockton Heath, where Lawrance would join me again. I would make Stockton Heath on my own, maybe with a little help of some friends. It would take me four days, with thirteen locks. But seventeen days, with 100 locks? I don’t think I have enough friends for that…

Of course we can wait until Lawrance is back from Portugal. But we also have to think of the annual winter stoppages, usually starting at the beginning of November.

A similar breach, in 2012/2013 at Dutton, on the Trent&Mersey took seven months to repair. That was during the winter, in the middle of nowhere, and not on an important canal. So I presume that a breach, close to roads, and on a very popular cruising ring, will be repaired quicker. Hopefully CRT doesn’t find any other, major problems around the breach.

So, for now, we stay put, and while battered by very strong winds (again), I’ll try to come up with a new cruising plan. Oh, the joys of boating…

Pictures are from the internet. I couldn’t find the name of who took them.