WRT seemed to be quite happy, when she wrote her last post. But I knew she wasn’t.
She really thought I neglected her.
I heard her complaining about all the spider webs at the windows. And she thought that even a bat had taken up living space on the boat. Not to mention that she felt haunted. Because she had the idea that she saw a ghost, but wasn’t entirely sure. 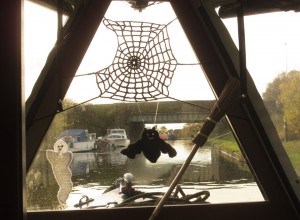 I tried to explain to her that the spider webs, bats and ghosts were fake; that the only real thing was the witches broom, and yes, I would be incognito again, after the Saturday night.
But I’m not sure if she did listen to what I said (very common on jetty 37 in the posh pound in Scarisbrick Marina…)

In fact, WRT should be happy. We were taking her out again, for an extended weekend to bridge 20A. One: to go to the pub on the Friday, two: to have a Halloween Party on the Saturday, and three: to have a Boaters Club Breakfast on the Sunday. And she would have a lot of company: there would be three boats on the Friday night, on the Saturday there would be 12 more, and another one early on the Sunday. 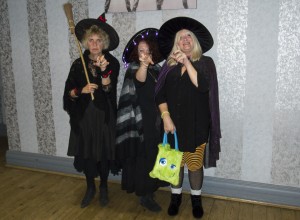 It certainly was good that she had to stay on the canal. She might have been a bit upset if she would have been in the restaurant on the Saturday. More silly old women in black, speaking to strangers and other creatures. 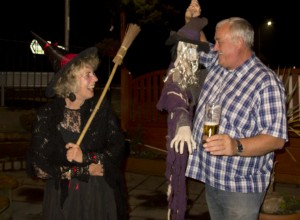 People trying to do pole dancing on a non-pole, and restaurant managers taking selfies with the guests. 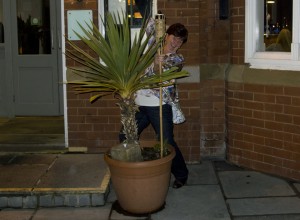 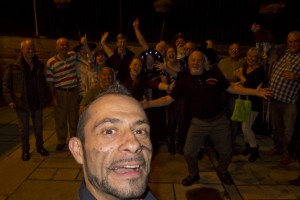 The Manager, taking a selfie

Around 01:30 hrs on the Sunday morning WRT got even more upset. Suddenly there was a trail of witches clothes, all over the boat. A hat on the decanter near the tv, lace boots in front of the fire, fingerless gloves on the book shelf, a shawl on the dinette, lace earrings on the kitchen worktop.
Disgusting…

It’s around noon, on Sunday the first of November 2015. It’s misty. An angler is sitting at this (usually) quiet part of the Leeds & Liverpool Canal. Quiet, especially on a Sunday at this time, and at this time of the year. Suddenly a narrowboat appears out of the mist. Once it is past, another one appears, and another one.
The angler decide to ask: “How many more, after you?” The answer he gets, prompts him to abandon fishing for a while, and to go for a walk. When the eleventh boat passes him, he clearly hears this boat muttering: “Feckin’ Ejits.”

Yes, he thinks, that’s what they are. Feckin’ Ejits…