It’s weird how your mind plays tricks with you. I just went to the toilet, and I’m walking back to the saloon. When I’m at the dinette I suddenly think: I didn’t flush the toilet.
What? is my next thought, is this the beginning of dementia?

But no, I’m on the boat, and there is no toilet bowl to fill up. So one doesn’t hear any water flowing through pipes. In the same respect, the last time I was in Newmachar and used water to rinse a cup, I was counting to ten, and waited for the water pump to start. Which, of course, didn’t happen.

Other, more practical things, apparently take a little longer to learn. Although the light switches are all at a logical place, I still can not find them in the dark. And don’t ask how many times I tried to switch the light in the bathroom on… with the controller for the central heating!. Which is just next to the light switch, but is completely flat.

I also found out that Wea-Ry-Tired gives and takes. While a heap of people have to deal with a lack of money, we have to deal with a lack of space. So to deal with that problem I have a map in my mind with possible locations of things. Papers we might need to refer to are in the saloon. Office stuff is in the dinette, under my seat. All kitchen equipment is in the galley, and all toiletries are in the bathroom. Clothing and shoes are in the cabin, and everything for the boat, and for cruising, is in the engine room.
I’m pretty sure I used this map, when we put everything in the boat. And I know for sure that there is nothing left in Newmachar, Doorwerth or in the truck (except for some stuff Lawrance still uses). But still there are things that I can’t find. I know they must be in the boat. They were in a banana box or a bag, and I put them away myself.
But no, there not in their logical place. So I end up searching the entire boat, with no result. I never thought that would (and could) happen in such a small space as Wea-Ry-Tired. In my house in Doorwerth, yes. But not here. Needless to say that the next day the things are in their logical place, right in front of my eyes. I didn’t move them, and currently I’m the only one on the boat. So it must be Wea-Ry-Tired, who’s playing tricks (Bitch!).

I must admit it’s all a bit crammed on the boat, at the moment. We basically combined three ‘houses’ in one boat. Which means that, for example, I now have enough shower gel for the next ten years, because I had some in my house, some in Newmachar and some in the truck.

The same goes for Lawrance’s whisky. The good thing with the latter is that one now can see the entire black grouse on the picture that is wrapped around the box. It’s a pitty that the other two bottles are of a different brand… 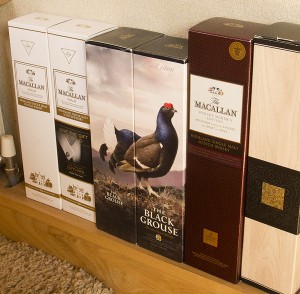