Well, that’s us back in the marina.
We spent our last night out at the Fishes.
In fact, I should say last nights, because with 40 miles/hour winds it’s pointless to go to the marina, and moor up outside… 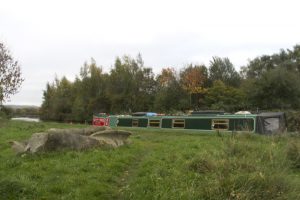 So it’s time for the usual (boring?) statistics.

I know, it’s not the end of the year, yet. But we’ll only go from the marina to The New Scarisbrick Arms twice, and to The Ship Inn once, so that will hardly add anything. Well, three days out, three days cruising, and 21 miles. Weather permitting, of course. 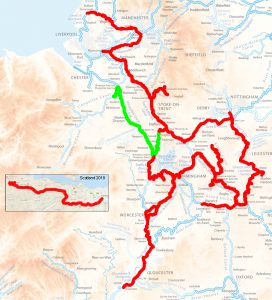 Green indicates the days that I’ve been cruising on my own, when Lawrance was in Portugal.
Unfortunately the Scottish canals are not on my basis map, so the insert looks a bit different. And, more important, is NOT TO SCALE!

So we were away a lot longer than in 2017 and 2016 (because there were no stoppages on the Bridgewater Canal).

We cruised a lot more hours, and covered a lot more miles. But we seem to get lazy: again we did less cruising hours per day.

This year the shortest day was longer and the longest day shorter.

Other than all this I haven’t a clue if there is a patern….